Myself, Cousin Sip and her husband recently returned to Romer’s Burger Bar (Yaletown location) for another round of their Craft Bowl competiton, which featured this beer from Moody Ales. To remind readers, the contest pits two to three beers against each other with diners getting to sample each option before picking their winner, which they then receive a full serving of.

While I chose the Hardy Brown Ale’s competitor for my full serving, it was a very tough choice and the stiff competition was evident by the nearly identical scores for both brews on the point’s board. 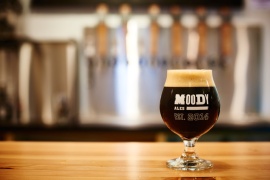 The brown ale had a strong toffee-flavoured aftertaste, which I wasn’t fully sold on. Upon first sip, I had originally thought I would choose the Moody Ales option as my pick for the contest. The only reason I sided with the other Craft Bowl beer, in this case, was because I wasn’t sure how a full serving would pan out. Cousin Sip went with the Hardy Brown Ale and at the time we left the restaurant, the Moody Ales brew was holding a slight lead.

I have yet to visit this Port Moody-based brewery and have only sampled a couple of their beers. I really need to try more of the company’s wares before coming to any final conclusions on their product.