Although Big Rock Brewing is based out of Calgary, their Urban Eatery in Vancouver also produces beer, so the Sip Advisor has made the landmark decision (in the matter of Big Rock v. The Sip Advisor) to include this brewery as part of the 366 days of BC craft beer project.

Good thing, too, as Big Rock hosted the Winter Beer Hall on Saturday, a feature attraction of the annual Dine Out Vancouver Festival. The brewery also took on the challenge of providing the two-week (January 15-31) foodie extravaganza with its very own craft beer, a first for the event. 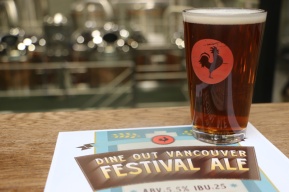 There is quite a bit going on with the Dine Out Van Fest Ale, with tastes of fruit and spice (and everything nice). Drinkers will notice hints of plum and chocolate, while enjoying the brew. Among the five casks available – there were two more on tap for VIP guests – at the Winter Beer Hall, this was among my and Mrs. Sip’s favourites.

I thought the beer had a great smell and lots of flavour. The ale tasted sweeter to me than other casks that were available. It was a good start to my tasting lineup.

Big Rock’s Urban Eatery in Vancouver is a fun spot for drinks. They are very experimental with their food menu, so picky eaters might find it hard to select a dish, while adventurous diners will have a great time trying new and interesting items.