While I picked a different beer during the Romer’s Burger Bar Craft Bowl competition round last week, both Mrs. Sip and Cousin Sip selected this Strange Fellows Brewing offering and to be honest, it was my runner-up and a strong contender for my choice, as well.

The Talisman West Coast Pale Ale is purported to be the perfect offering to win favour from the Sirens of the Seas, hopefully gaining folks “safe passage and a bountiful catch” rather than “storms and shipwrecks”. I like to play a little risky, though and there’s no way any sea creature is getting my beer! 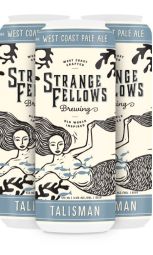 According to Strange Fellows, this beer pairs well with absolutely anything. They did narrow that down slightly with the suggestions of burgers, cheese, fish and chips, and pizza. I had my sample with garlic fries and those two seemed to go well together.

I preferred this beer over my other two Craft Bowl options because it was lightly hopped compared to its IPA competitors.

Mrs. Sip and I have only been to Strange Fellows location once before and should really try to get back there, as our original visit was shortly after the brewery opened. That said, I have tried some of their other brews at bars around Vancouver and have enjoyed them. Of specific note is their Nocturnum Dark India Pale Ale, which will certainly be featured as part of this 366-day BC craft beer project eventually.