Christmas may have passed, but to keep in the spirit, let’s have one more look at some great gifts given, this time in TV history:

Looking to impress young intern Ryan, Michael Scott totally disregards the $20 limit on Secret Santa gifts and instead buys a $400 iPod, setting off a trading war for the music player. The real great gift was what Jim had put together for Pam: a tea pot filled with mementos and a private letter (which he later withdrew). Across the pond, the U.K. Office also had a memorable gift exchange, when Tim gave Dawn an art set, encouraging her to “Never give up” on her dreams. 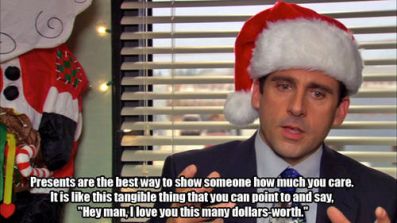 While it was simply an oversight, Mary Richards’ Christmas turned interesting when she received a blank cheque from boss, Lou Grant, as a gift. What would you do? Personally, I would bilk TV station WJM of every dime they had and then vanish into the night, never to be seen again, as I live the rest of my days in some tropical paradise with Mrs. Sip and an endless supply of booze. Mary, on the other hand, had to go and inform the gruff managing editor of his error.

Christmas shopping can be an awkward exercise, especially when finding a gift for someone you don’t know so well. Part of the issue is you don’t know what they might be getting you in return. Sheldon Cooper seemed to have that all figured out by buying his neighbour Penny bath baskets in varying sizes. When she surprises him with a signed napkin from his hero Leonard Nimoy (Star Trek’s Spock), he rushes to his room and gathers every basket he had assembled.

Down on his luck after learning he will not receive a Christmas bonus and that his second job as a mall Santa didn’t pay out as he had hoped, Homer Simpson had no presents for his family. Fortune has a funny way of turning around at Christmas, though, and as Homer and Bart are picking through the discarded wagers outside the dog track, hoping to find a winning stub, out comes the dog they bet on, in need of a new family. This special was the start of The Simpsons long animated run.

There are some incredibly thoughtful gifts in this Christmas special. While Odie’s construction of a backscratcher for Garfield was incredibly cute, the lasagna-loving cat stole the holiday by unearthing lost love letters sent to Grandma Arbuckle by her late husband. The funny thing is that if this were ever to happen for Mrs. Sip in the very distant future, a tuna water-loving kitty would have to dig up all my old e-mails to her. Hopefully the cat has no issues remembering my password.

Some might argue that the greatest gift from TV might be the now real holiday of Festivus, from the Seinfeld episode The Strike. If that’s how you prefer to celebrate, I hope your airing of grievances, feats of strength, and Festivus miracles are everything you ever wished for!