Sit Down, Shut Up

Last week, we looked at the Sip Advisor’s pet peeves on the field of play, committed by athletes. This week, we examine the fouls perpetrated by the fans on the sidelines… your fellow enthusiasts. Heck, one may be sitting next to you as you read this. Let’s get on with the list:

You know the people that work too hard to get on TV, usually yapping into their cell phone to make sure they’re getting the exposure they want… yeah, these people should be immediately ejected from the stadium and banned for an indeterminate amount of time. For one, they’re not paying attention to the action on the field of play and are more concerned with a brief game cameo. Second, they’re usually obscuring the view of other fans in that seating area. Is that really worth the price of admission?  People holding large signs can be lumped in with this group. 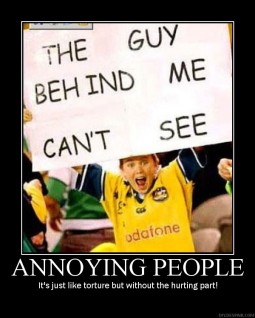 I love a beer with my sports (albeit I’m not fond of the price, but whateves), but I certainly refuse to spend more time in concession line-ups than I do watching the contest. Even worse are those people who are constantly getting up and down throughout the game and blocking your view of the action. There must be some sort of cosmic law out there in the universe that says those who will be up and down throughout a game will be seated in the center of an aisle, while those who will be mostly seated will have spots on the aisle, repeatedly disturbed.

If you’re not going to bother following the squad when they need the support the most, then you’re not a true fan. Sure, anyone can get behind a franchise that is loaded with stars and expanding its trophy case, but the true die-hards will be there through thick and thin. You only hope that when someone jumps off the bandwagon, they hurt themselves so seriously that they never get back on. Sadly, the world of fandom doesn’t work this way and the long-time fan suffers most, as ticket prices rise, which can be covered by those who only offer part-time backing.

#2: Yelling “Get in the Hole” for Every Shot

The obnoxious fan who started this trend should be drawn and quartered, all the while being pelted by golf balls. All you ever see today is fans shouting “get in the hole” for every single shot of a golf round. It’s particularly absurd on long par-5 tee shots, that have absolutely no chance of being sunk. I guess having some passion on the part of khaki-wearing, sweater vest-adorned golf fans is welcome, but not this way. Unfortunately, Tiger Woods followed this annoying phrase a little too closely and wound up losing his wife, kids, picture perfect image, sponsorship deals, credibility, and so much more.

This is something I simply refuse to do. I paid good money for my seats and until the final buzzer, my ass will be stuck in said seat. Mrs. Sip and I recently attended a hockey game in Anaheim and were flabbergasted when the arena began emptying out before the shootout was even conducted. While I would NEVER leave a game early, I could at least understand if it was a blowout score, but taking off when things are all knotted up… that’s insanity! Incredulously, fans left the stadium before the Seattle Seahawks miraculous comeback over the Green Bay Packers, to punch their ticket to a second consecutive Super Bowl. Some missed out on the greatest rally the team will ever have.

I’m also greatly opposed to the wave, which is why I selected the shooter above. What’s worse is when some jackass has a few too many bevvies and tries throughout the entire game to get this crap going. What fan behaviour earns your ire? I’m curious to hear!

Sip Advisor Bar Notes (4 Sips out of 5):
I gave this shot to Mrs. Sip (who is a pickier drinker than myself) prior to going out one night and she enjoyed it. I also liked it, but then again, I’m an easier to please audience. My greatest concern in constructing the shooter was how to garnish it. None of the ingredients have an obvious garnish partner, so I went with a Caramel Sauce rim, which pulled the whole thing together!