While Get Fuzzy is the Sip Advisor’s favourite comic and he doesn’t stray too far from that strip (although he loves him the occasional Garfield story), Belgium is known for a few animated legends that have recently been turned into feature film franchises. Let’s take a closer look at these works:

The Adventures of Tintin

First published in 1929, Tintin was created by the artist simply known as Hergé (real name Georges Remi) as part of a newspaper supplement. Tintin books have gone on to become big business, selling more than 350 million copies in over 80 different languages. The character is often described as a native son of Belgium, which is pretty good praise for someone whose best friends are a dog and an oft-drunk sea captain.

Have you ever wondered where the name Tintin came from? The character’s first name is actually Martin and Tintin is a common nickname for people named Martin in French-speaking countries. His dog Snowy is actually called Milou in the French comics, while the detective duo of Thompson and Thomson are named Dupont and Dupond.

Tintin, a teenage journalist and detective, has travelled the world and even beyond it. He’s had adventures in the Congo, the Soviet Union, China, and even on the moon. If you wish to keep up with his globetrotting, you may be out of luck. Some of the regions he’s visited are completely made up, such as Khemed, Borduria, Syldavia, and Nuevo Rico.

The 2011 film release, involving movie moguls Steven Spielberg and Peter Jackson, sees Hergé actually appear in the opening scene as the street artist. A Tintin theatrical release had been in the works since the 1980’s, when Spielberg first crafted a script for the Belgian icon. There has also been a Tintin TV cartoon (the Sip Advisor’s first introduction to Tintin adventures), BBC radio show, two French live-action films, stage shows, and publicity stunts.

Created in 1958 by artist Peyo (what’s with all these Belgian comic creators going by a singular name), also known as Pierre Culliford, the Smurfs are branded as Les Schtroumpfs, in French. Peyo came up with the word ‘schtroumpfs’ when he forgot the word for salt at a dinner party and made something up on the spot. Smurf is simply the Dutch translation of the word.

The Smurfs, thanks to their North American TV cartoon, become a pop culture hit in the 1980’s (Smurfmania had already hit the U.K. in the 70’s), spawning their own cereal (including a commercial starring a 13-year-old Jack Black), video games, songs, dance craze, theme park attractions, Ice Capades show, and, of course, lines of toys and other merchandise that kids just had to have.

In the beginning, there was only 99 Smurf characters, but that number has risen over the years. Despite the growth in population, there are only three female Smurfs: Smurfette, Sassette, and Nanny Smurf… talk about a sausage party! Some Smurfs from the original comics never made the crossover to TV and film. These characters include Alchemist Smurf, Timid Smurf, Enamored Smurf, Finance Smurf, Lumberjack Smurf, and Navigator Smurf.

The Smurfs helped create modern zombies, thanks to a 1959 comic called ‘The Black Smurfs’ (‘The Purple Smurfs’ in North America). The story was about a Smurf being bitten by an insect, before going around and biting other Smurfs, turning them into aggressive, living-dead beings. This comic was released years before George A. Romero’s ‘Night of the Living Dead’ and featured the birth of Grouchy Smurf, the patient zero who never regained his full Smurf senses following the outbreak. 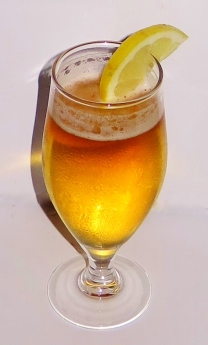 Belgium has been dubbed ‘Home of the Comic Strip’ and these panels are considered to be an important part of Belgian life. Next time the Sip Advisor is visiting, he will certainly sit down with a Tintin or Smurfs anthology and give it a read. Some Belgian beer will help with the language barrier!

Sip Advisor Bar Notes (3 Sips out of 5):
This cocktail was simple, but that’s not necessarily a bad thing. The drops of Sherry floated on top of the drink, gave the brew a unique taste and made it look neat with that hazy red colour. Stella is a clean, crisp and easy to drink beer.