It’s not even debatable… hockey players are the toughest athletes in the world. While baseball players miss time with blisters and soccer stars writhe on the pitch and clutch their legs on phantom touches, NHL’ers play through devastating injuries on a regular basis. As the league returns to action tonight for their 2013-14 season, these hombres must be saluted as the toughest of the sporting bunch!

Steve Yzerman is known as one of the greatest leaders in sports history. In 2002, Yzerman suffered a serious knee injury, but refused to let it keep him down. Yzerman had good reason to continue playing, though. His Detroit Red Wings lifted the 2002 Stanley Cup, mere months after he was an integral member Canada’s 2002 gold medal triumph at the Winter Olympics. Following that glorious year of events, Yzerman had to have his knee completely realigned, but still returned to hockey that season.

Continuing to play at a professional level with broken ribs is one thing, but imagine that same injury resulted in a punctured lung. Most normal people can’t even laugh with broken ribs, let alone play a highly physical and demanding sport. Patrice Bergeron played through Stanley Cup Final games with a punctured lung, among other injuries. It’s not like Bergeron didn’t already have a Stanley Cup on his resume, as the Bruins had won the grand prize just two years earlier, but Bergeron continued to play so as not to let down his team.

You’re already pretty tough in my books if you’re willing to stand in front of the net and have shots fired at you, as well as players crashing your crease… you’re even tougher if you did it back in the days of limited padding and no face masks. In a 1959 game, Jacques Plante took a slapshot to face, breaking his nose and cutting him open. Plante simply got stitched up, put on a mask and returned to ice. The occurrence ushered in the goalie mask as a regular protective device in the NHL.

In January 1993, following repeat Stanley Cup championships and amid another wildly successful season, Mario Lemieux announced that he would be taking some time away from hockey to treat his Hodgkin’s lymphoma cancer diagnosis. Not ever cancer could stop Super Mario, though. He returned to hockey two months later and on the same day as radiation treatment to score a goal and add an assist. He was even given a standing ovation from the opponent Philadelphia Flyers fans, some of the toughest supporters in all of sports.

There’s something about the current crop of Boston Bruins that is admirable. On top of Patrice Bergeron’s struggles from the Stanley Cup Finals, there is also the case of Gregory Campbell, who stayed on the ice to kill the rest of a penalty after blocking a shot which broke his leg. Campbell struggled to stay in the play and break up whatever he could before hobbling to the bench and leaving the game.

During the Toronto Maple Leafs 1964 Stanley Cup finals series with the Detroit Red Wings, defenseman Bobby Baun broke his leg blocking a Gordie Howe shot. He was taken from the ice on a stretcher, but reemerged on the bench for the overtime period. Although he wasn’t known for his offensive abilities, the hockey gods looked down kindly upon Baun that night and he notched the overtime winner, forcing a game seven. The Leafs would hoist the cup days later with Baun still in the lineup.

Before concussions were such a hot button topic, a player could “get his bell rung” and be back on the ice in no time. But imagine taking one of the hardest open ice body checks in hockey history, from one of hockey’s all-time thunderous hitters and returning to the ice minutes later to score a huge goal, extending your team’s playoff life and championship bid. That’s exactly what Paul Kariya did when Scott Stevens flattened him in game six of their Stanley Cup Final Series. 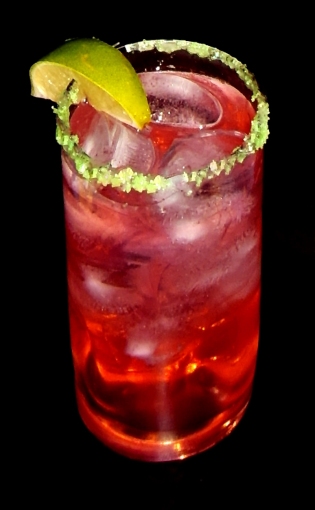 There are people out there who don’t go to work when they twist their ankle or have a cold… not the noble hockey player, however. Much respect to the brotherhood of hockey players out there. Let the games begin!

Sip Advisor Bar Notes (4 Sips out of 5):
This was an impressive drink. The Brisk Strawberry-Melon, which had found itself tucked away in the fridge for far too long, came out and had a career-making appearance. No more riding the pine for this mixer… it earned itself a brand spanking new contract with this gutsy performance!