When working with strawberries, the Beatles tune Strawberry Fields Forever will often pop into my mind, earworm style. With this week’s feature mixer being Strawberry Juice, I thought it would be a perfect time to look at some songs about places (more specific than a city or state) you can actually visit:

The world’s most famous band (my opinion, of course) had a couple of hits about real places around their hometown of Liverpool. These include Penny Lane and the aforementioned Strawberry Fields Forever. When the Sip Family visited Liverpool in 2007, we took a tour that stopped at these locations, as well as the grave of Eleanor Rigby, featured in the song A Day in the Life, and rumoured to be where John Lennon and Paul McCartney first met.

Cash’s Folsom Prison Blues made the Folsom State Prison a part of pop culture. Later, Cash would perform twice at the venue, calling the inmates who watched his shows, “the most enthusiastic audience I have ever played to.” Notable prisoners of the 137-year-old jail, include musician Rick James, actor Danny Trejo and notable psychopath Charles Manson. That said, I doubt the prison is any kind of attraction, unless you’re a serious Johnny Cash fan.

While sounding upbeat, this Eddy Grant song is actually about a riot that took place on the south London street in 1981. The riot started due to recession tensions, which were felt particularly by the area’s African-Caribbean community. When we first moved in together, Mrs. Sip and I almost rented an apartment in a building called Electric Avenue. You better believe this song would have been going through my head every time I walked through the front doors. 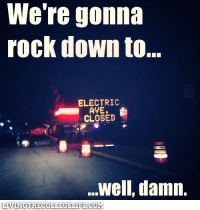 Portabello Road, located in the Notting Hill area of London, was featured in song in this 1971 Disney musical film. The track highlights the road’s market and those who inhabit it. Mrs. Sip’s love of Disney resulted in us venturing to the area on one of our trips to London. Sadly, there wasn’t much of a market running when we visited, perhaps due to the inclement weather we had to contend with. Despite this, I still allow Mrs. Sip a lot of control over our touring plans.

This song is most memorable for the amazing saxophone pieces, which apparently increased sales in the instrument, following the track’s release. Baker Street, of course, refers to the London road, whose most famous resident is the fictional Sherlock Holmes. Rafferty’s song, however, was about feelings of alienation and isolation. On most of my visits to London, I’ve ended up in the area, for a quick picture or two outside 221B Baker Street.

It’s amazing how most of these songs highlight areas of England and finding other such examples was very difficult to do. Oh well, time to rock down to Electric Avenue (you know, after the eight-plus hour flight to the UK and pain getting through immigration and all!).

Sip Advisor Bar Notes (3 Sips out of 5):
I couldn’t find any straight up Strawberry Juices, so I went with Strawberry-Kiwi. To enhance the berry flavour, I used Raspberry Vodka and rimmed the glass with Strawberry Jam. The results were decent, but nothing spectacular.