Have you ever wondered where some of our sayings for approval come from? Well, as we feature Peach Juice as this week’s mixer, let’s take a look at some of those sayings and delve into their origins:

Sometimes shortened to simply ‘peachy’, the term can often be used ironically, when things aren’t going as well as originally hoped. Radio DJ Jim Hawthorne is credited with making the term popular and it was even used by Rizzo in the movie Grease.

Saxophonist Lester Young is credited with first popularizing the word cool as slang. Nicknamed Prez, Young encapsulated the African-American jazz scene of the 1940’s and the culture it inspired. The musician can also be recognized for coining the term ‘bread’ to mean money. 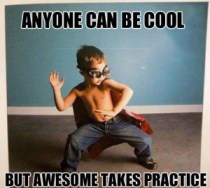 Most often heard from the cast of Scooby Doo, groovy is also a jazz slang term from the 1920’s, referring to the grooves in a vinyl record. It returned with a vengeance in the 1960’s and became a big part of the hippie counter-culture of the time.

After going through a couple incarnations, including being used by surfers in the 1970’s to describe a dangerous wave, it was picked up by teens in the 1980’s to describe something that was excellent. The same backstory explains the word ‘Tubular’, as well.

Much more than a Broadway play, wicked can now be used to describe everything from awful to amazing things. Apparently, the concept was born and bred in Boston, Massachusetts and now that I’ve pointed that out, you can totally hear a New Englander saying it.

Literally meaning “something which inspires awe”, with the word becoming more used as slang, it has lost some of its original significance. That said, it has brought to the world such enhanced terms as awesome sauce, awesomeness and awesometastic.

Once again, we go to the African-American jazz scene and their vernacular for this one. Meaning “fashionably current”, Wikipedia reminds us that what is hip is continuously changing. As Grampa Simpson once said: “I used to be with it, but then they changed what ‘it’ was”. 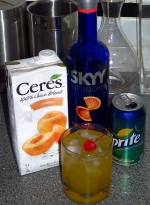 Put most of the words together and this sounds like a Teenage Mutant Ninja Turtles work. Of course, some honourable mentions go to terms like tight, sick and bad, which imply the opposite of their original meaning.

Sip Advisor Bar Notes (3.5 Sips out of 5):
The Grenadine didn’t show up as well as I’m used, but perhaps that’s because I went very light with it, not wanting the cocktail to become too sweet. The little fireball in the sky, courtesy of the Maraschino Cherry garnish, was still present, though.