To celebrate Canada’s 150th birthday, Central City Brewing has released the Red Racer Across the Nation case, featuring collaborative beers from 12 of the country’s provinces and territories (only newest territory Nunavut is left out). Always a fan of collaboration beers, I just had to pick up the set, going straight to the source to do so, before it was even rolled out to liquor stores. Each 330ml beer was brewed at Central City’s Surrey facility and was inspired by the province or territory it comes from. Here’s the lineup of the pack: 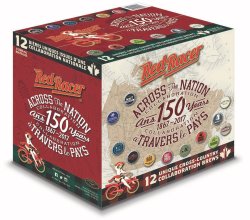 Hitting store shelves in early May, the beer sets were released in two formats: a 12-pack of the entire collection and two six-packs, featuring the East and West releases bundled together. Tasting events in each province have been arranged for the case’s launch. Sadly, the Sip Advisor will be out of town for both BC occasions. For a full listing of upcoming tastings, please view Central City’s press release.

The price tag of just under $35 (with tax and deposit) is quite a bit more than one would pay for the average case of craft beer, but this is a special release. I’m looking forward to trying a number of these beers and getting to know some of the breweries from across the nation.

“There is a great sense of comradery amongst us craft brewers in Canada, and what better way to show our pride in our country than to bring together some of Canada’s best breweries on a celebratory mix-pack to commemorate this huge Canadian milestone,” said Gary Lohin, brewmaster of Central City. “We all know Canada is renowned for our great beer and it has been such an honour to work with each of the breweries. We can’t wait to showcase some spectacular beers and the brewing talents of all 12 breweries.”