I have long wanted to try this beer from Parallel 49 Brewing, but it always seemed to elude me. Well, I have finally caught up to my prey and while the chase was fun, the spoils of the hunt were even greater.

The Salty Scot Ale leans more towards sweet than salty, but it is a good beer, perfect for the winter season. At 7.5% ABV, you would think the beer would be quite strong, but this element isn’t that noticeable. The suggested serving temperature is between 10-12 degrees Celsius, so you might not want to super chill the brew. 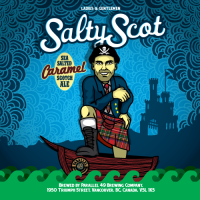 With the popularity in sea-salted caramel products, it’s not surprising that a brewery would hop aboard the bandwagon, as the two make such a perfect coupling. Parallel 49 takes the Scottish Wee Heavy style and ups the game with the addition of caramel malts and “enough salt to give it a bit of a bite”.

We recently learned that the logo was designed after the brewery’s accountant (said to be a salty Scot) and that’s why the caricatures’ pouch reads “Scott”. Apparently, the designers of the logo didn’t reveal it to said accountant until the very last moment, offering no opportunity for changes to it.