Even within the province of BC, the Sip Advisor loves going to liquor stores while travelling because I often discover products that don’t seem to get shelf space at stores in the Lower Mainland. Such was the case with this release from Mt. Begbie Brewing.

The Brave Liver Scotch Ale is very tasty, with flavours of roasted malts and caramel. At 6.5% ABV and 22 IBUs, this is a fitting ‘Wee Heavy’ Scottish Pale Ale, but the peat flavour that is often included in this style of brews was missing. 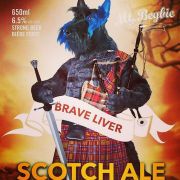 Although the beer is described as a winter seasonal, I came across it for the very first time this summer and don’t recall ever seeing it before. Apparently, the beer was bottled for the first time in November 2015, so I should consider myself lucky that a few bombers still existed come the summer.

I love the name of this brew and I honestly believe that my liver is one of the bravest in the land. Suggested food pairings include roast beef, lamb, game meats, smoked salmon, aged cheeses, toffee pudding, and chocolate desserts.