As has been the case every time we’ve hit a milestone mark along the road of this 366-day BC craft beer project, the Sip Advisor has elected to profile a favourite beer. For post #200, we look at this gem from Cannery Brewing.

I first enjoyed the Naramata Nut Brown following the 2015 Bacchanalia wine event in Penticton, BC. Following a full day of vino drinking, the Sip Advisor was desperate to change things up and with complimentary drink ticket in hand for the hotel bar, I quickly placed an order for the brew. I was greeted with a smooth and flavourful beer, featuring stats of 5.5% ABV and 25 IBUs. I have since returned to the Nut Brown on a couple other occasions, most recently relishing a pint while having lunch at 19 Okanagan Grill + Bar over the Canada Day long weekend. 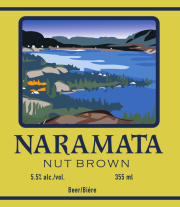 The beverage has earned the brewery numerous awards, dating all the way back to 2002, when it took home Best Beverage of the Okanagan Fest-of-Ale. Since then, it seems to have been a fixture at that annual event. As the company writes: “Don’t be afraid of the dark!”

Cannery has also provided a few recipes which incorporate the ale as an ingredient. These include a beef stew, beer-basted sausages and braised short ribs. I have been more than happy to suggest this beer to friends and the results have all been positive. Now I share it with all you little sippers!