We wrap up our Brews Brothers odyssey with this collaboration featuring Strange Fellows Brewing. These two East Vancouver neighbours are among the most popular spots in the city for craft beer lovers and their coming together is something I was eager to try. 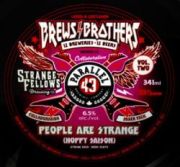 The People Are Strange Hoppy Saison didn’t disappoint and was a bit of an exclamation point of this amazing pack of beers. I’ve already declared that this will be the summer of saisons for the Sip Advisor (having previously enjoyed the summer of IPAs in 2014 and the summer of stouts in 2015) and I’m glad this 6.5% ABV beverage was part of that. One note: the taste kind of reminded me of those coloured marshmallow eggs you get around Easter.

Each beer is named after a classic rock song and People Are Strange by The Doors was a perfect selection given Strange Fellows is the partner brewery involved. While not the band’s greatest hit, this track is a great example of The Doors psychedelic rock style, which made them standout in the industry.