The thing I like best about beer festivals is being introduced to breweries I haven’t yet had the chance to experience or in some cases, breweries I’m being reintroduced to. Such was the case at the recent Tapped Vancouver at the Yaletown Roundhouse, where the Sip Advisor was able to get reacquainted with Black Kettle Brewing, after last trying their wares at July’s Tip N’ Taste in Langley.

As myself, Cousin Sip, and her husband approached our first booth of the night at Tapped Vancouver, we each picked one of the company’s options. I went with the IPA and found it to be a great starting point to my evening. I later returned for their two other selections (the Pale Ale and Scottish Ale), which will be profiled here at later dates. Where was Mrs. Sip, you might be asking? Well, she was running late, as is typical for her and with beer available, we weren’t willing to wait. 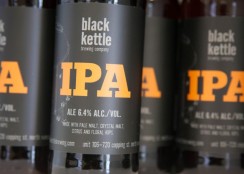 The brew comes in at 6.4%, but is lighter than most IPAs, while still being joined by the hoppy taste we’ve all come to expect from this variety of beverage. As an IPA fan, I will look out for this product when buying beers and suggest it to friends who also like their brews to have a little more of an edge to them.

I named Black Kettle my choice for MVP of the Tapped Vancouver event (not that this was an actual competition there) and it has earned its way onto our list of must-visit breweries when the Sip Alliance finally gets their act together and tours North Vancouver’s burgeoning brewery region. This little exploration can’t happen soon enough!