Each month, as part of this 366-day BC craft beer extravaganza that I will be sharing with you throughout 2016, I will highlight a specific style or theme of beers for a whole week of articles. For the opening month of this project, I wanted to look at some of the flagship and original offerings from breweries around the province.

While Parallel 49 Brewing has grown to have numerous beers on tap in their East Vancouver (affectionately known as ‘Yeast Van’ among beer aficionados) tasting room and available in stores across the province, my original experience with the company was through their Gypsy Tears Ruby Ale, which I still enjoy today. 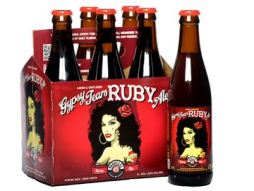 “Of all the test batches we did, we found that Gypsy was a clear winner, and thus was part of the launch beers,” said Chris Bjerrisgaard, Marketing Manager of Parallel 49. “It remains popular to this day because it’s an incredibly versatile beer which can please the core craft beer nerd, as well as those who are not even into craft beer. It’s malt and hop balance allow you to drink a lot of them without getting tired of it. All in all, it’s the Swiss army knife of craft beers… it does it all!”

Started by a troupe of home brewers, Parallel 49 has evolved to become one of Vancouver’s most popular craft breweries, featuring an always expanding product line. The team opened a restaurant together in 2008, before focusing on their own brewery, launched in 2012. Over time, I’ve tried countless Parallel 49 beers and don’t know if I could name a favourite. Some have satisfied, a couple have disappointed. Gypsy Tears, a solid brew, may be up there among my favourites from the company.

Mrs. Sip and I have visited Parallel 49’s tasting room on a few separate occasions. Most recently, we went in with Sis-in-Law Sip and ordered one sample of everything they had on tap. While this worked in getting to try their entire menu at the time, we weren’t provided any kind of map or chart of what was what, so we had to play the “guess the beer” game. Not a bad way to spend an afternoon, if you ask the Sip Advisor!