Mrs. Sip has advised me that as we enter the second half of the craft beer advent calendar, some of her selections aren’t based on the beer having a winter or Christmas theme, but being intriguing brew styles that she knew I’d enjoy trying. So, let’s get right down to it!

Coming to you live from Seattle, this fall seasonal was a really awesome beer with hops that didn’t completely blow you away, but were prevalent enough to really be relished. At only 4.7%, this has been one of the lighter beers to come from the advent calendar, but that’s another fine change to have as the month progresses. This is the first beer I’ve had from the Washington company, but it advertises itself as the Northwest’s longest running independently owned brewery. I’ll have to find more selections.

I don’t think I’ve ever had a Finnish Sahti style beer, but if they’re anything like Parallel 49’s version, it’s a pretty good variety. Traditionally, Sahtis are characterized by the flavor of juniper berries, sometimes used instead of hops. Apparently, Parallel 49 first released this beer in 2013 and it has somehow slipped under my radar these past few years. Like Phillips Brewing, Parallel 49 has some really unique labels and this is among them, featuring what can best be described as a European Santa Claus/bigfoot cross. 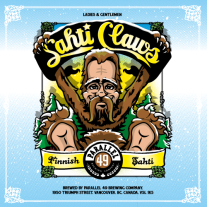 Speaking of Phillips, the Victoria brewery makes a second appearance in the advent calendar, thanks to another variety that I’ve never come across before. In recent times, I’ve enjoyed some really good brown ales and the addition of sour raspberry had me salivating after pulling this bottle from the calendar. I think the brown style ale gave the sour raspberries a perfect balance and this beer went down very easy. This may be one of the brewery’s tamest labels to date, though.

This was another very unique brew that had me excited from the moment it was revealed. I’m very impressed with Mrs. Sip’s choices for the advent calendar and her pushing me to experiment with many of these beers. After previously enjoying 4 Mile’s English Strong Ale, this brew had a fair bit to live up to and while it wasn’t as good as the Strong Ale, I still liked it. After looking more into 4 Mile’s seasonal brews, I’m looking forward to trying their Prickly Pear Cactus Wheat Ale and Tangerine Dream Ale, due out this spring.

I’m kind of sad to be halfway through the craft beer advent calendar, having really enjoyed it being part of my late evenings, revealing the next brew shortly after the clock turns over to start a new day. Mrs. Sip may have created her own monster here!