I’ve always wanted to get my hands on a violet liqueur because you don’t see too many purple cocktails. With that in mind, the Sip Advisor started to think about the most notable things out there that are purple. Here is that list:

Jimi Hendrix sure knew how to rock a guitar and this is one of his most recognizable songs. In fact, it was the opening track on the Jimi Hendrix Experience’s debut album, so it was technically the first time most listeners heard the band’s work. Many believe the song describes a psychedelic experience, but Hendrix called it a love song. Perhaps it was both! Also in the realm of purple-themed music is Prince’s ‘Purple Rain’ and D-12’s ‘Purple Pills/Hills’. 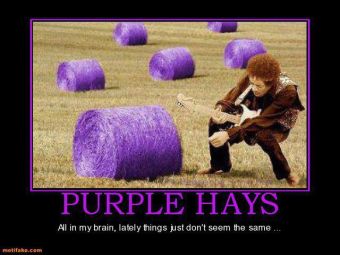 Given to soldiers who are wounded or killed in action, the Purple Heart is the oldest military award still handed out by the United States. The medal has been awarded since 1917 and was previously known as the Badge of Military Merit, dating all the way back to the time of George Washington. The estimates of how many times this medal has been awarded through the years is quite sobering. World War II alone accounts for 1,076,245, according to a 2009 National Geographic article.

These were the absolute worst growing up… perhaps the Indian burn was more painful in the short term, but purple nurples lasted longer in both throbbing ache and bruising. The bullying act has gone by other names, such as the titty twister and nipple cripple, but purple nurple is the name the Sip Advisor knew (and feared) it as. The purple nurple has been turned into a cocktail recipe, which sounds pretty good, combining Coconut Rum, Triple Sec, Blue Curacao, and Cranberry Juice. 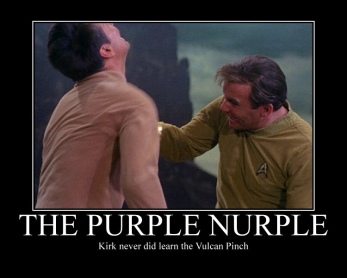 This book-turned-movie-turned-musical sees a poor, uneducated 14-year-old black girl, living in the southern U.S., deal with issues such as an abusive father, racial tension, sexism, women’s rights, and so much more. Written by Alice Walker, the book won the 1983 Pulitzer Prize for Fiction, as well as the National Book Award for Fiction. The film, directed by Steven Spielberg, starred a young Whoopi Goldberg and also featured the debut of Oprah Winfrey.

The tone of this song sounds like we should embrace the purple people eater, but I advocate avoiding it at all costs. The tune became a Billboard pop chart topper for about a month in 1958, which blows my mind, especially when compared to number one songs nowadays. The “one-eyed, one-horned, flying, purple people eater” made its way to also being a 1988 sci-fi-comedy family film, starring one Neil Patrick Harris. The movie’s plot is one whole sentence on Wikipedia!

There are also a few character who are memorable for their purple hue, clothing, or accessories. This list includes Ronald McDonald’s diabetic buddy Grimace; Barney the Dinosaur; Donatello of the Teenage Mutant Ninja Turtles; and the ‘Clown Prince of Crime,’ the Joker.

Sip Advisor Bar Notes (??? Sips out of 5):
This recipe is a variation of the classic Aviation cocktail. There’s also a similar adaptation called Moonlight, which adds Cointreau and subs Lime Juice for Lemon Juice.
I upped the dose of Violette Liqueur from 0.5 oz to 1 oz, because I wanted it to be featured more