Admittedly, the Sip Advisor isn’t content with his current career. Apparently, I’m not alone, as there is a lot of literature out there about why people hate their occupation and what they should do about it. With Labour Day rapidly approaching, here are some other folks that really hated their job:

Before moving to a life of crime and meth production, Walter was a high school chemistry teacher. And it’s not that there’s anything wrong with that, but he had previously been on the cutting edge of the science world, before selling his share in an idea that would eventually become quite profitable. Walt is so underpaid as a teacher that he has to take a side job as a carwash cashier and when he’s diagnosed with cancer, he has to enter into the seedy world of drug manufacturing, in order to make enough cash to keep up his treatment. 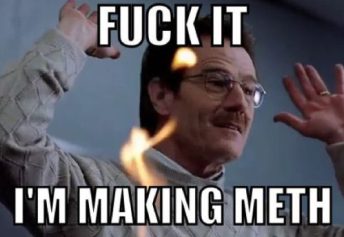 Out of all the entries on this list, I probably identify most with Peter, who is frustrated with his place in life and the lack of pleasure his mundane, dead end career brings him. His dealings with his boss are excruciating and he has no other option but to take all the crap. Flanked by his colleagues Michael and Samir, the trio try to take a small cut from each transaction coming through the company, only to have their program give them a much larger slice than they intended. At least they got to destroy the printer that was always breaking down.

In a similar fashion to Peter from Office Space, Jim is young and talented, but stuck in a job that pays the bills, while not providing the satisfaction he’s really searching for. If it wasn’t for his attraction to receptionist Pam Beasley, he probably would have bolted years earlier. I gotta say, though, working closely with your girlfriend/wife and getting to see her at all hours is something I would love to do. I know it’s not for everyone, but it’s cool with the Sip Advisor. In time, Jim figures things out and begins to pursue an interest in a start-up sports marketing company.

While Homer has tackled numerous jobs (boxer, sports mascot, snow plow driver, voice actor, etc.) during the show’s long run, the one he has to attend day in, day out, is one he does not enjoy. Homer was able to break free once from the Nuclear Power Plant, but with another baby on the way, was forced to return and grovel for his job back. A sign now sits in his sector, which states: “Don’t Forget: You’re Here Forever.” Homer changed the sign with photos to read “Do It For Her” in reference to daughter Maggie, the reason he had to return.

Nearly every episode of this iconic show featured woman’s shoe salesman, Al Bundy, returning from a day of work in which he didn’t get paid very well, but was verbally and sometimes physically abused by the clientele. “So a fat woman walks into the store today,” is usually how the tale began and ended with an epic struggle to fit a woman’s foot (or hoof as Al often called it) into a shoe that was too many sizes smaller than needed. So much for a guy who once had dreams of playing pro football… all until he was married with children!

For those out there that are working in what they love to do (or at least what they went to school for), I am absolutely jelly of you. Sadly, the Sip Advisor has to save his passions for outside of work… and I don’t even get paid for my efforts. One day, my rainbow will come though. I just have to keep my head held high and reach for the sky!