While my neighbours to the south celebrate their Independence Day, I’d like to salute the most steadfast American patriots… well, at least of the fictional variety. And no, Abraham Lincoln: Vampire Hunter doesn’t count! On with the list:

This Muppet is a staunch advocate for the good ol’ U-S-of-A, while also being a straight-laced defender of decency and high culture. He certainly doesn’t fit in with many of his fellow Muppets, who rely on slapstick routines and lower-brow entertainment. Perhaps Sam’s biggest role was in the recent Muppets Most Wanted film, where he, as a CIA agent, teamed with an Interpol agent to clear the good name of Kermit the Frog and save the entire Muppets troupe, in the process. 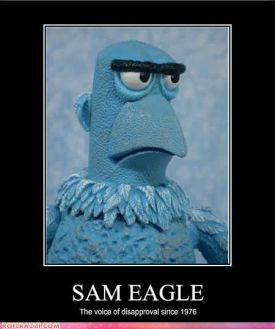 The wrestling world is rife with American patriotism, featuring countless battles between red, white, and blue clad heroes versus villainous foreign foes. It’s hard to pinpoint one grappler in particular, but these are a few of the many who have fought in defense of Old Glory, capitalism, and the American way: Hulk Hogan, Lex Luger, Kurt Angle, The Patriot, Sgt. Slaughter, ‘Hacksaw’ Jim Duggan, Jack Swagger, Dusty Rhodes, Corporal Kirchner, and the American Express. U-S-A, U-S-A, U-S-A!

This line of Hasbro action figures was first released in 1964, representing four divisions of the United States’ armed forces: the army, navy, air force, and marines. In fact, the releases were the first to ever receive the designation “action figures”. A cartoon later came in 1985, which saw the Joes battle the evil terrorist group Cobra. Two films, in 2009 and 2013 (with one to come in 2016) have also been released for the franchise. Good will always triumph over evil!

Used as a major symbol for propaganda, particularly during war times, Uncle Sam (who coincidentally has the initials, U.S.) has existed for approximately 200 years. Many believe that Uncle Sam was based on Samuel Wilson, a meat packer from Troy, New York, who helped provide soldiers with rations during the War of 1812. Regardless, if you see Uncle Sam, he probably wants you to fight for the country, joining one of the branches of U.S. armed forces.

Battling evil forces, the likes of which include the Red Skull, Barons Helmut and Heinrich Zero, Flag Smasher, and even Adolf Hitler, himself, Captain America is the ultimate defender and avenger (see what I did there!) of the United States against oppressors from other evil nations. With his trusty red, white, and blue shield, Captain America will be protecting the country (and world) for years to come. And to think, he was originally rejected as a member of the army, before going super soldier.

I was surprised at how difficult this article was to put together. I figured there would be so many more glaring examples of fictional American patriots, but many weren’t so obvious. Perhaps I’ve just missed a number of folks that should have made this list. Let me know if I’m guilty of neglect!