With school coming back into session for many little sippers out there (although not here in B.C., where it looks like we might have the makings of a long teacher’s strike), it might be time to snatch some good reading material. While I would never classify myself as an avid reader, there have been some books I’ve thoroughly enjoyed. Mrs. Sip would love to see me sit down more often with a book, but TV’s warm loving embrace is just too much to break. Here are my favourite books/series throughout life:

One of the only things I enjoyed about elementary school (save for gym, recess, and spelling tests… what can I say, I was born to write) was the monthly Scholastic book catalogue that came out, providing me an opportunity to grow my Goosebumps collection, which sits to this day in a drawer at Ma and Pa Sip’s home. I still fondly remember some of these stories, such as Attack of the Mutants, A Night in Terror Tower, and The Phantom of the Auditorium. The covers on these novels alone were enough to chill your blood and get you pumped for your next classroom quiet time. There were 62 releases in the original series and a TV show followed, but when it came to screen screams, I was more of an Are You Afraid of the Dark fan. 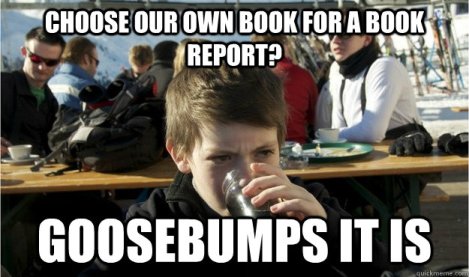 The World Hockey Association had a brief life, but it changed the landscape of professional hockey and in some circumstances, the entire sports world. Journalist Ed Willes takes the reader through the league’s tumultuous existence from conception to absorption by the NHL, right through a mess of teams going out of business or being relocated. The dichotomy of the league, with its highly-skilled players meshing with fight-filled contests, is just one aspect of a mesmerizing story. Willes captures all the sordid tales and behind-the-scenes dealings that made the WHA such a fascinating flash in the pan. Largely based on this book, I was able to rank the WHA #1 on my list of top defunct sports leagues. I only wish I had been able to experience some of the action in-person.

#3: Get Fuzzy Treasuries by Darby Conley

I never really got into comic books as a youngster, fancying my superheroes on the screen, as opposed to in my hands (save for some of the sexy female heroines). That said, I do prefer to look at brightly coloured pictures, rather than printed words, and that can come in the form of some lighter entertainment. My hands down favourite daily funny is Get Fuzzy, which focuses on the interactions of human Rob Wilco with his pets/roommates Bucky Katt and Satchel Pooch. Bucky is a little terror, who is constantly trying to run (scratch that, ruin) the household, while Satchel is a sweet and gentle pup, happy to have a chew toy and a quiet place to nap. Rob just gets stuck in the middle, just like your typical real world pet owner.

I really enjoy learning unknown tidbits about subjects I’m interested in and this series is perfect for exactly that. Thanks to these books, I’m an integral member of any trivia team I’m invited to join (aside from my wonderful personality!) and the lesser known facts my brain is able to absorb have garnered me a fair bit of free booze! The best thing about Bathroom Readers is that you can read one piece or a selection of articles… I guess it depends on how long you’ll be in the bathroom. I personally prefer to not have a book in my hands while I’m on the pot, but admittedly, that is what these releases were meant for. My favourites from the Uncle John library include TV, Movies, and Hockey.

While my favourite books are sports-related, Mick Foley’s wrestling autobiography is a no-brainer to top this list. And I’m not alone in my fondness for this story. Books released by wrestlers exploded after the success of Mick Foley’s first attempt and the string of publications is going strong to this day. In Have a Nice Day: A Tale of Blood and Sweatsocks, Foley guides us through the earliest days of his life and career with a wit and warmth that makes it extremely hard to put the book down… even for a non-reader such as myself. I have yet to check out Foley’s other two non-fiction releases, but have heard good things about both and should really take the time to pick them up.

Given my penchant for wrestling reads, I would also recommend autobiographies by Bret Hart, Shawn Michaels, Ric Flair, and Chris Jericho, as well as the book WrestleCrap: The Very Worst of Pro Wrestling. There are a number of others I would endorse, but it’s time to get back to the library and go silent!

Sip Advisor Bar Notes (4 Sips out of 5):
You layer the ingredients in A-B-C order and that allowed me to finally use the layering tool I received a few months back. It worked out really well and looks great, am I right!? The shot tasted fantastic, especially when the Irish Crème kicked in following the two liquors, which move a little quicker. Too bad I couldn’t think of a D-garnish to continue the ABC theme.