Anyone travelling in Russia has to pick up a Fabergé Egg (or at least a suitable knockoff), but what do we really know about these expensive and fragile relics? Luckily, the Sip Advisor is here for all your antiquity needs!

The famous jewel-covered eggs were created by artist Peter Carl Fabergé, starting in 1885. They were originally given by Tsar Alexander III to his wife as an Easter morning treat and continued by Alexander’s son Nicholas II (to his wife and mother), leading up to the Russian Revolution. Of the approximately 50 ‘Imperial’ eggs the House of Fabergé created, 43 still exist. Not that I’m complaining, but all I ever got for Easter was chocolate and candy!

Fabergé’s first creation was dubbed the ‘Hen Egg,’ which featured a seemingly ordinary egg, but inside was gold yolk that contained a golden hen (with ruby eyes, no less) on a nest of gold. And the gifts kept coming. Inside the hen was a miniature diamond version of the royal crown, as well as a ruby egg pendant that could be worn as a necklace. While the Hen Egg is among those that have survived, the gifts inside have been lost to time (a sad, but common theme among the eggs).

Other famous eggs include the Diamond Trellis, Rosebud, Bouquet of Lilies Clock, Trans-Siberian Railway, Basket of Wild Flowers, Moscow Kremlin, Rose Trellis, Standart Yacht, Colonnade, Napoleonic, Winter, and the unfinished Constellation. Constellation was never completed and presented thanks to the Russian Revolution taking place and the royal family being executed.

Eggs were made each year, except for 1904 and 1905, when Russia was at war with Japan. As the legend of the eggs grew, Fabergé picked up more clients, including industrialist Alexander Kelch, the Duchess of Marlborough, and the Rothschild and Yusupov families. Each egg contained hidden gifts, usually trinkets such as pendants and other jewelry that could be worn by the recipient. 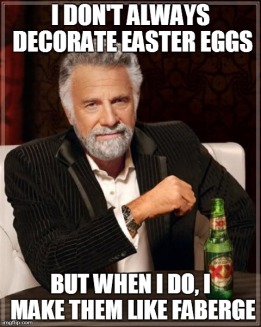 Some of the eggs ended up in private collections, while others are on display in museums around the world. Most of the eggs that are missing are thought to still be out there somewhere, while a few have certainly been destroyed, with little reference to them following the Russian Revolution. Next time Easter rolls around, you better be careful about what you discard and what you examine a little closer.

One of the ‘Imperial’ eggs was almost sold as scrap metal. Although the unidentified owner was looking to take home $500 from melting down the piece, the egg was actually worth $33 million US. Thankfully, the owner didn’t get the money he was hoping to score and kept the item. Thought to be the ‘Holy Grail’ of the antique world, it was last listed in an auction book in 1964 before it was located earlier this year.

Fabergé Eggs were Russia’s featured showcase for the 1900 World’s Fair in Paris. This earned Fabergé, his two sons, and his head workmaster awards from the French government, as well as boosted the company’s profile and client list. The main Fabergé outlet still exists in St. Petersburg. Although it has been renamed, it is still known as the Fabergé store.

As for the artist, Fabergé was forced to flee Russia during the October Revolution of 1917. His company was seized by the new Bolshevik government and broken up. Fabergé died in 1920 at the age of 74, after taking refuge in Switzerland (following stops in Latvia, Germany, and Finland). The Fabergé brand has never disappeared, first being operated by Fabergé’s children before being purchased by larger corporations, which use the name for colognes and perfumes.

Another Russian treasure is the Matryoshka Dolls (or Nesting Dolls) which feature progressively smaller figures as you open each doll. There are sets for Russian presidents, various holidays, and other famous figures. While in Russia, I picked up a Christmas set for Ma Sip and a Beatles set for Pa Sip. Both were really neat and a perfect memento to bring back as souvenirs.

Sip Advisor Bar Notes (4.5 Sips out of 5):
This cocktail comes from the Rum Howler, who has a great site reviewing a bunch of different spirits and including a recipe with each post. I used Squirt instead of Grapefruit Juice to add some fizz to the cocktail and it was a nice addition. It basically turned into a Vodka-based Mojito and with that beautiful Beluga Vodka, it was a knockout of a cocktail!