Truth be told, I’m not much of a pie fan (dirty jokes aside). It’s not that I don’t like pie, but I’m more of a cookie and brownie man. I thought it might be best to list some of my favourite dessert treats, in case anyone out there is looking to butter me up like the living legend that I am.

While they’re advertised as two-bite treats, it’s much more enjoyable to shove the entire brownie in your mouth and chomp on it noisily. If you’re looking for a fun evening in the future, try having a brownie bash. Each player brings a bag of two-bite brownies, which are emptied out into the centre of the playing surface. Then each competitor builds up a fortress for safe keeping of their treasures and you play Hungry Hungry Hippo’s style, running and retrieving one treat at a time until all the brownies have been claimed.

Nothing beats ending a long hard day with a plate of cookies and a cold glass of milk… unless it’s a fat beefy burger and an ice cold cocktail. Hell, if your guy-et is going well, why not do both! Rainbow chips Ahoy (which are clearly superior to regular chocolate chips ahoy) are one of my favourite camping supplies and you truly haven’t experienced all the joys of life until you’ve made smores between of these two cookies. As a bonus, the rainbow chips take you back to fond childhood memories quicker than the sight of an ice cream truck.

Mrs. Sip really stole a piece of my heart when we celebrated our first dating anniversary and she bought me an entire Black Forest Cake even though she isn’t besties with any cake other than Ice Cream Cake. Yes, that black forest beauty and I spent a bulk of the next week together, sharing tender glances, romantic embraces and nights of unbridled passion.

The fun part about fondue (maybe they should just call it FUNdue… great, now the lame police are after me… why do I always write the worst jokes?) is coming up with interesting things to dip in the chocolate. While pedestrian items like fruit, marshmallows and sponge cake are used by the masses, I am an extreme fondue-er, dunking sub sandwiches, turkey legs, and edible underwear into the melted goodness.

These cookies are amazing! Every time Mrs. Sip and I are in Disneyland or Disneyworld, a good portion of our snack budget (well, budget is a loose term, given it’s an infinite amount) is spent of these treats. We’ve come home with an entire suitcase filled with the delicacies before… and it’s not like we make them last for as long as possible. They are often demolished in a single serving, as we go into a trance-like orgy of cookie destruction. The next morning, we awake to smears of chocolate and peanut on our clothing (luckily we’re still in clothing); crumbs, like fallen snow, littering the floor; and splashes of milk dripping from the ceiling.

This is Mama Sip’s world famous recipe, which has caused her to be hounded over the years by family, friends, co-workers, even da freakin’ pope, to make them. Basically, they are a chocolate cupcake with chocolate chip cheesecake mixed in and are absolutely fabulous warmed up or even cold. Made from a secret family recipe that has been handed down for thousands of years, I may have said too much already. If you would like the recipe, please send $500 to Sip Advisor Enterprises and I’ll get back to you in due time. 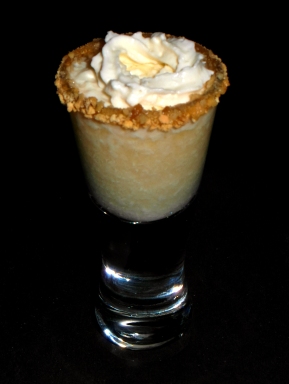 There are at least three variations of this shot and I kind of put pieces together from all three to make my version. Enjoy!

Sip Advisor Bar Notes (4 Sips out of 5):
Full disclosure: I left out an ingredient when making this shooter. Originally, I forgot to include Galliano, so I had to make it again. It worked out pretty well when done properly. The Graham Cracker Crumb rim was a key part of the recipe.