Each week, the Sip Advisor will alphabetically travel the United States, discovering the best each state has to offer in a variety of subjects. Today, North Dakota gets the Sip Advisor treatment. It has a number of nicknames, including Flickertail State and Roughrider State. Apparently, North Dakota is the least visited state in the country, so let’s try to change that.

Motto: “Liberty and union, now and forever, one and inseparable” – I feel like this slogan could easily be shortened.

Food: Much of North Dakota’s cuisine is influenced by German and Norwegian dishes. This includes Knoephla (potato dumpling soup), Fleischkuekle (meat pie) and Lefse (flatbread). It should also be noted, most pasta in America is made from North Dakota’s durum wheat, so think of that the next time you’re carbo-loading.

Drink: There’s not a lot going on in the drink world for North Dakota. However, I did discover that the state was the last in the country to have a winery, when Pointe of View Winery began operating in Burlington, in 2002. Pointe of View uses many different fruits in their wines, including their award-winning Rhubarb Wine. 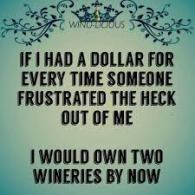 Site to See: Theodore Roosevelt was greatly influential in the establishment of the U.S. National Park system. So, it should comes as no surprise that he is the only person to have a park named after him. Found in North Dakota’s badlands, where Roosevelt became the man who ended up leading the nation, the park is heavily visited, with scenic drives and hiking opportunities.

Street: The Enchanted Highway is a 32-mile route in Regent, featuring a number of scrap metal sculptures. Each installation along the way has an area allowing cars to stop. Artist Gary Greff created the sculptures and maintains them, including Geese in Flight, the world’s largest metal sculpture, according to the Guinness Book of World Records.

TV Show: While the movie Fargo is named for North Dakota’s biggest city, it mostly takes place in Minnesota. The TV show adaptation spends far more time in North Dakota, with parts of the first two seasons taking place in the state. The fourth season of the series will air this fall, starring Chris Rock, and set in Kansas City, Missouri, in the 1950’s.

Movie: Leprechaun, best known for Jennifer Aniston’s film debut, sees a North Dakota man return home from a trip to Ireland, where he stole a leprechaun’s pot of gold. The leprechaun follows, looking for revenge, but is trapped in a four-leaf clover. When the Redding family moves to the farm 10 years later, hilarity and horror ensues, as the leprechaun is released. 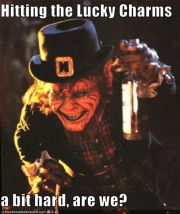 Book/Author: Western writer, Louis L’Amour, was born in Jamestown. Over his career, L’Amour wrote 89 novels, 14 collections of short stories and two non-fiction pieces, and was called “one of the world’s most popular writers”. Many of his works were adapted into film, with his most notable character being Hondo, played by the legendary John Wayne.

Fictional Character: Jay Gatsby, protagonist of The Great Gatsby novel and movie adaptations, is from North Dakota. The self-made millionaire is known for hosting lavish parties in New York City. Gatsby has been portrayed by actors such as Leonardo Di Caprio and Robert Redford in film, while Kirk Douglas played Gatsby in a radio adaptation broadcast.

Fictional City: Rock Springs is the setting of primetime soap opera Blood & Oil, which sees a young couple move to the North Dakota town following the largest discovery of oil in U.S. history. The series stars Don Johnson as an oil tycoon, but only lasted one season and 10 episodes (cut from an original order of 13 episodes).

Actor/Actress: Angie Dickinson, born in Kulm, enjoyed a six-decade long acting career, most notably as star of TV show Police Woman, for which she was nominated for three Emmys. Also, Josh Duhamel was born in Minot, remaining involved with his hometown, co-owning the restaurant 10 North Main. He has starred in four of the five films from the Transformers franchise.

Song: North Dakota by Tigirlilly, is an ode to the state that would make any citizen proud. Tigirlilly is comprised of sisters, Kendra and Krista Slaubaugh, from the small town of Hazen. The pair, who have been writing and performing since they were preteens, are now pursuing their country music careers in Nashville, Tennessee.

Band/Musician: Rapper Wiz Khalifa was born in Minot. He is best known for songs such as Black and Yellow and Young, Wild & Free (with Snoop Dogg). There’s also barefoot guitarist Jonny Lang, born in Fargo, who has toured with the likes of the Rolling Stones, Aerosmith, B.B. King, Jeff Beck, and Sting. He won a 2007 Grammy for the album Turn Around.

People: From musician, to TV host, to business mogul, Lawrence Welk did it all. Born in Strasburg, Welk’s music career, as a big bang leader, led to him hosting The Lawrence Welk Show from 1951 to 1982. Using the TV show, Welk promoted his business properties, including Welk Resorts, with a handful of locations across North America.

Animal: The National Buffalo Museum, in Jamestown, was home to White Cloud (Mahpiya Ska in the Sioux language), a rare albino buffalo. White Cloud died in 2016, at the age of 19. Prior to passing, she had returned to her home herd. The White Cloud Days Festival is still celebrated, with her white calf Dakota Miracle taking over the role of feature attraction.

Invention: The Cream of Wheat porridge mix was invented in Grand Forks, in 1893. It debuted at that year’s World’s Columbian Exposition. Cream of Wheat has been in the news recently, as products with black characters have come under fire. Rastus, a black chef, appears on Cream of Wheat packaging and in ads, although this is being reviewed by the company.

Crime: In 1920, Henry Layer nearly wiped out an entire family, using a shotgun and a hatchet, after an argument over a dog biting his cow. Seven members of the Wolf family (parents and five daughters), as well as a neighbour boy were all found dead. Only the Wolf’s youngest child, a nine-month-old daughter was spared. Layer was given a life sentence, dying in prison five years later.

Law: It is illegal to lie down and fall asleep in public with your shoes on. I’m not sure if wearing sandals is an issue and I’m assuming going barefoot makes everything okay. I hope they apply this law to babies and young children!

Sports Team: With no professional teams, the sporting void is filled by the University of North Dakota Fighting Hawks and North Dakota State University Bison programs. When the school’s football squads meet, they battle for the Nickel Trophy. The Fighting Hawks men’s hockey team is also notable, having won eight national championships and many alum becoming NHL pros.

Famous Home: The Custer House, located in Fort Abraham Lincoln State Park, is a reconstructed home of General George Custer, he of Custer’s Last Stand. Reconstructed or not, it’s said the ghost of Custer haunts the home, with visitors experiencing taps on their shoulder and objects moving. Other spirits may include Custer’s wife, soldiers who died in Custer’s charge and the distraught wives of those soldiers.

Urban Legend: The Legend of White Lady Lane takes place in Walhalla. The story goes, a young woman was murdered by the man who wished to marry her, when the girl’s mother forbid the arrangement. The woman can be seen, dressed in a white nightgown, near Eddie’s Bridge, perhaps searching for the man who killed her.

Museum: The Paul Broste Rock Museum, in Parshall, is hard to miss, given the site is built out of rocks. Broste wanted to showcase his collection of rocks, so he built the museum with Greece’s Parthenon in mind. The museum also houses Broste’s art works, including paintings, sculptures, illustrations, poems, and other pieces.

Firsts: The first mosque in the U.S. was located in the remote town of Ross, with a population of around 100 people. Built in 1929, the small structure was used by Muslims who settled in the farming community. In 1979, the mosque was torn down, but was rebuilt in 2005, by one of the remaining families in the area.

Company: Mr. Bubble is America’s most popular bath product brand. The bubble bath was invented and distributed by North Dakota’s Gold Seal Company, until it was sold to Airwick Industries in 1986. Mr. Bubble has popped up in many TV shows and movies and even has its own holiday, first celebrated on the 50th anniversary of its original release.

Events: Two booms in North Dakota history helped increase the population of the state. This includes farming settlers arriving between 1879 and 1886, which brought 100,000 people north, and when oil drilling came to North Dakota in the 1970’s, which is paying off today, as North Dakota is the fastest growing state in the country.

Miscellaneous: Nobody knows for certain whether North Dakota is the 39th or 40th state. When both North and South Dakota were given statehood, President Benjamin Harrison shuffled the signed admission papers around to leave things vague. North Dakota generally gets the nod as the 39th state, based on it being first alphabetically.

This dessert cocktail was created at the Blue Blazer Lounge in Bismarck. It was named for two oilmen who frequented the bar, Wendell Smith and James Curran. The drink is also known as a Smith and Kearns, with Curran’s last name being altered. A variation of the beverage uses Kahlua instead of Crème de Cacao.