Each week, the Sip Advisor will alphabetically travel the United States, discovering the best each state has to offer in a variety of subjects. Today, we travel to Maine, known as the Pine Tree State because it is largely covered in forest. It has also been dubbed the Vacation State, but there’s no rest for the wicked, so let’s start our exploration:

Food: Maine Lobster is known the world over for its taste and tenderness. The industry is so important to the state, the University of Maine opened a Lobster Institute, in 1987. For dessert, you could have an order of Donut Holes (invented in Maine) or a Whoopie Pie – two mounds of chocolate cake with filling or frosting in the middle – which is the State Treat.

Drink: The official soft drink of Maine is Moxie, created by Mainer, Augustin Thompson, in 1876. The soda was originally a medicinal tonic, with Thompson claiming it treated “paralysis, softening of the brain, nervousness, and insomnia.” Purchased by the Coca-Cola Company in 2018, the drink is said to be sweet with a bitter aftertaste. 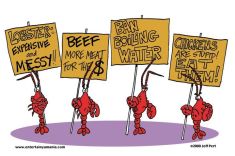 Site to See: One of the most visited national parks across the country, Acadia National Park was established (under a different name) by President Woodrow Wilson, in 1916. The park’s Cadillac Mountain is the first spot in the country to be greeted by the sunrise from October to March.

Street: Commercial Street, in Portland, was named one of the 10 best streets in America, in 2008. A number of wharfs, each featuring seafood restaurants, can be accessed from Commerical Street. The Maine State Pier is located along the route as well, where an outdoor music site can be found.

TV Show: I don’t care what anyone says, Murder, She Wrote, is an amazing TV show. Sure, it’s hard to imagine someone would end up being so closely associated with as many murders as Jessica Fletcher was, but that’s part of its… um, charm. Had it been revealed Fletcher was, in fact, a serial killer, that would have made for an epic series finale.

Movie: The Shawshank Redemption stars Tim Robbins as Andy Dufresne, who is wrongfully accused of the murder of his wife and her lover, and sent to Shawshank State Penitentiary, in Maine. There, he befriends fellow inmate Red, played by Morgan Freeman. Dufresne ends up escaping the prison and makes sure Red is able to join him in freedom, once he’s released. 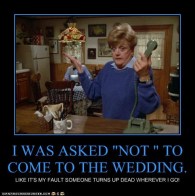 Book/Author: Most of Stephen King’s books are set in Maine (Pet Sematary, It, Salem’s Lot, Carrie, Cujo, etc.), using fictional settings such as Castle Rock, Derry and Jerusalem’s Lot. King himself is from Maine, providing the familiarity he uses when plotting out his works.

Fictional Character: Among all the horror creations from the mind of Stephen King, an amiable specter also hails from Maine. Casper the Friendly Ghost is from the town Friendship (at least in the 1995 film), where he haunts Whipstaff Manor. But all Casper really wants is to find a friend to cure his loneliness.

Fictional City: Everyone in Cabot Cove (Murder, She Wrote) seems to end up dead or a murderer. Instead, I’ll live with the catalogue of Disney characters who inhabit Storybrook (Once Upon a Time). Perhaps I could snuggle up close to some of those princesses!

Actor/Actress: Anna Kendrick, star of the Pitch Perfect film trilogy, was born in Portland. Kendrick, who would make the Sip Advisor’s very short list of Hollywood stars he finds attractive, also lends her voice to the Trolls franchise of animated movies.

Song: I had to choose the Maine Stein Song by Rudy Vallée for this category because a drinking song will always top all others in my books. The fight song of the University of Maine actually topped the music charts in 1930, the only college tune to ever do so. The song peaked in popularity during prohibition, although its lyrics were written three decades earlier.

Band/Musician: Rudy Vallée was raised in Westbrook and would become one of the first teen idols/pop stars. Vallée would go on to inspire the likes of Frank Sinatra and Bing Crosby, among other crooners. Apparently, Vallée was so popular among female fans, if he was singing in a venue lacking microphones, he had to use a megaphone.

People: During the tense Cold War times of the 1980’s, 10-year-old Samantha Smith (from Houlton) wrote to the Communist Party of the Soviet Union, and was invited to visit the republic as a Goodwill Ambassador. Her visit, heavily covered by the media, showed both sides they were more similar than previously thought. Tragically, Smith died in a place crash, at the age of 13. The Soviet Union honoured Smith with a stamp, while Maine celebrates Samantha Smith Day each June, among other remembrances from both countries.

Animal: The Official State Cat of Maine, is the Maine Coon Cat, the largest domesticated cat breed. The origins of the Maine Coon are rumoured to involve Marie Antoinette, who in trying to escape her fate in France, sent six prized cats to America, where they mixed with other breeds, resulting in the Maine Coon. 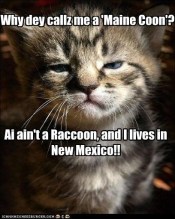 Invention: The Microwave Oven was invented by Mainer Percy Spencer, when he began experimenting with various foods, after noticing a candy bar melted in his pocket, while the physicist was working with magnetrons and radar. Thanks to him, people can get their TV dinners, instant noodles and popcorn in a matter of minutes.

Crime: In 1806, James Purrington, a farmer in Hallowell, murdered his wife and seven of their children (ranging in age from 18 months to 19 years) with an axe, before committing suicide using a straight razor to his own throat. Purrington’s 17-year-old son survived the ordeal and escaped to a neighbour’s home. Legend has it, Purrington was buried with the weapons he used.

Law: Maine has been called “The Birthplace of Prohibition,” as they were the first state to enact such a law, in 1885. This led to the Portland Rum Riot, which led to the law being repealed in 1856. If that wasn’t bad enough, folks can be fined for leaving Christmas lights up after January 14.

Athlete: Marathon runner, Joan Benoit Samuelson, was born in Cape Elizabeth. She was the first ever women’s Olympics marathon champion, winning gold at the 1984 Summer Olympics. She also held record times for an American racer at the Chicago and Boston Marathons, for 32 and 28 years, respectively.

Famous Home: The Harriet Beecher Stowe House, in Brunswick, is where the landmark anti-slavery novel, Uncle Tom’s Cabin, was written. The place is now a museum, featuring Harriet’s Writing Room. Poet Henry Wadsworth Longfellow had previously lived at the residence, while a student.

Urban Legend: The University of Maine at Farmington is said to be the site of much paranormal activity. Founded in 1864, notable hauntings include Nordica Auditorium, where the piano is played, with no one seated at it, and Mallett Hall dormitory, where the sound of furniture being moved can be heard above the third floor, despite there being no fourth floor.

Museum: The International Cryptozoology Museum, in Portland, is the only museum in the world dedicated to the study of mysterious creatures such as Bigfoot, Sasquatches, Yetis, Lake Monsters, and others. Maine is apparently a hotbed of Sasquatch sightings, so the location makes sense. 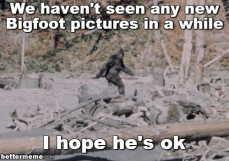 Firsts: Born in Skowhegan, the first female presidential candidate was Margaret Chase Smith, who sought the Republican nomination for the 1964 election. While her bid for the nomination, Smith is credited with being the first woman to serve in both houses of the U.S. Congress.

Company: Clothing and outdoor recreation equipment retailer, L.L.Bean, was founded in Freeport, where it is headquartered to this day. The company’s flagship store still exists there and is open 24 hours a day, seven days a week, having only closed on a handful of occasion throughout its history, including this current global pandemic.

Events: The 1866 Great Fire of Portland, started as the result of Independence Day celebrations, likely from fireworks or cigar ash. The blaze spread quickly, resulting in only two deaths, but 10,000 people left homeless, as 1,800 buildings were destroyed.

Miscellaneous: The town of Strong was once known as the Toothpick Capital of the World, producing 20 million toothpicks each day (75 billion each year), at the height of the industry. This accounted for 95 per cent of the world’s toothpick supply. However, toothpicks have been replaced by floss and other items, with the last toothpick produced in Strong, in 2003. 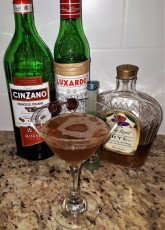 This cocktail was made in recognition of the USS Maine, which was sunk off the coast of Havana, Cuba, in 1898. Spain was blamed for the incident, so the slogan “Remember the Maine! To hell with Spain,” became popular and the 1898 Spanish-American War soon followed. The drink has some similarities to a Manhattan and that is just fine by me.