Each week, the Sip Advisor will alphabetically travel the United States, discovering the best each state has to offer in a variety of subjects. Today, we travel through Kansas, which presented me with the challenge of differentiating between the state and Kansas City, Missouri. Our focus is on the Sunflower State, so let’s pop some seeds and get right into things:

Motto: “To the stars through difficulties” – Nah, I’d rather take the easy route!

Food: Brought over from Germany, Bierocks are meat pie pockets filled with ground beef, onions, cabbage and spices. They are very popular in Kansas, with many restaurants having them on their menu. Some even call Bierocks the state’s official food.

Drink: The Icee machine was invented in Coffeyville, by Omar Knedlik, a Diary Queen owner at the time. The device allowed for frozen drinks to be served, later being sold to 7-Eleven stores, bringing the world the Slurpee. Today, Icee offers a number of products under three different brands, but has moved its operations to California.

Site to See: Monument Rocks (aka Chalk Pyramids) are large formations found in Gove County. They comprise one of the 8 Wonders of Kansas, which also consist of Mushroom Rock State Park, Tallgrass Prairie National Preserve, and other attractions across the state.

Street: Wyatt Earp Boulevard takes folks through the infamous Dodge City, one of the wildest settlements of the Old West. Of course, Wyatt Earp is the legendary lawman who served Dodge City for a time. A bronze statue of Earp is located along the route.

TV Show: Gunsmoke began as a radio series, before being adapted for TV. The show is one of the longest running in history, airing for 20 seasons and 635 episodes. Starring James Arness as Marshall Matt Dillon, Gunsmoke outlasted 30 other westerns to hit TV screens over that time.

Movie: One of the most beloved films of all-time, The Wizard of Oz, is set in Kansas. “We’re not in Kansas anymore!” is one of the most iconic lines in cinema history, said by Dorothy Gale to her dog Toto, as the duo find themselves in the mysterious land of Oz, following a tornado that hits the family farm. Remember, there’s no place like home.

Book/Author: In Cold Blood by Truman Capote, is a non-fiction account of the 1959 Clutter family murders in Holcomb. The book has gone on to become the second-best-selling true crime work ever and is thought to be among the originators of the genre.

Fictional Character: On the lighter side of the Kansas literary world, Dennis the Menace comics are also set in the state. Dennis Mitchell, the young troublemaker and thorn in the side of Mr. Wilson, is from a suburb of Wichita. Despite his penchant for causing chaos, Dennis means well and he is only a kid, after all.

Fictional City: Smallville, home to Clark Kent and other characters of the Superman universe, is located in Kansas. In the Smallville TV series, it’s established the town is located west of Wichita and southwest of Dodge City.

Actor/Actress: Dennis Hopper was born in Dodge City. His most famous roles include Easy Rider (which he also directed), Blue Velvet, and Hoosiers. Hopper made a great villain, playing that role in a trio of 1990’s films: Super Mario Bros., Speed and Waterworld. Sadly, Hopper died in May 2010, following a battle with cancer. 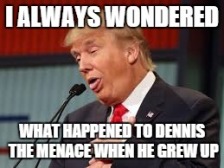 Song: Home on the Range is the State Song of Kansas, with lyrics written by Kansan Dr. Brewster M. Higley, in the poem My Western Home. Crooners Bing Crosby and Frank Sinatra have recorded versions of the folk tune, as have numerous other musicians.

Band/Musician: It wasn’t difficult picking a musical act from Kansas, as one named after the state immediately jumped to mind. Kansas was formed in 1973, in Topeka. Best known for their hits Dust in the Wind and Carry On Wayward Son, the band is still performing together.

People: Iconic aviator, Amelia Earhart, was born in Atchison. She became the first female to fly across the Atlantic Ocean, both as a passenger and on her own. With all the mystery surrounding her disappearance in 1937, as she attempted to fly around the world, Earhart has remained an intriguing figure. The 2009 film Amelia, starring Hilary Swank, documented Earhart’s life.

Animal: Touchdown I to XI were real-life bobcats who were the animal mascot of the Kansas State University Wildcats from 1922-1978. This was after coach Charles Bachman renamed the team, ushering in the Wildcats era. 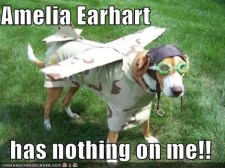 Invention: The first patented helicopter design was developed by William Purvis and Charles Wilson, in Goodland, in 1910. While the project was abandoned by both inventors by the time the patent was approved, the work of Purvis and Wilson eventually led others to fully realize a flying helicopter.

Crime: Dennis Rader, better known as the BTK Killer (for bind, torture, kill), murdered 10 people in Wichita between 1974 and 1991. Rader taunted police with a series of letters, describing the crimes. He was eventually arrested in 2005 and pled guilty, receiving a punishment of 10 consecutive life sentences. Also from Kansas, the Bloody Benders were America’s first serial killer family, with a body count of more than 20 between 1869 to 1873.

Law: At one point, it was illegal to serve ice cream on cherry pie. Poor, poor, cherries, always the victims of discrimination.

Sports Team: NCAA basketballs squads, including the University of Kansas Jayhawks and Kansas State University Wildcats, are the most popular sporting outlet in the state. Kansans also support the teams of Kansas City, Missouri, with stadiums located close to the Kansas border.

Athlete: Pro Football Hall of Fame running back, Barry Sanders, was born in Wichita. Over a 10-year career, Sanders was a Pro Bowl selection every season he played, earning the NFL’s MVP award in 1997. Sanders surprisingly retired in 1999, at the age of 30 and still healthy. He is thought to be one of the greatest running backs ever.

Urban Legend: Fort Leavenworth has been called the “most haunted army base in the United States”, thanks to sites such as the Fort Leavenworth National Cemetery and the demolished United States Disciplinary Barracks. Hauntings include the ghost of Catherine Sutter searching the cemetery for her missing son and daughter and phone calls being traced back to a barracks tower that had no phone line, following the suicide of a soldier there.

Museum: In Topeka, folks can find the Evel Knievel Museum, which houses the largest collection of memorabilia for the famous daredevil, as well as interactive exhibits, allowing visitors to experience virtual reality stunt jumps. If that’s not your type of thing, there’s also the Kansas Barbed Wire Museum, in La Crosse. 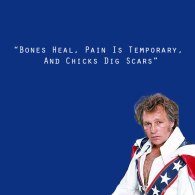 Firsts: Actress Hattie McDaniel, born in Wichita, was the first African-American to win an Oscar, thanks to her role as Mammy in Gone with the Wind. Perhaps even more notable, McDaniel was the first woman to sing over the radio in the U.S.

Company: AMC Theatres, the largest theatre chain in the world, is headquartered in Leawood. The company recently celebrated its 100th anniversary. Also of note, restaurant chains Pizza Hut and White Castle were both founded in Kansas, before moving their operations to other states.

Miscellaneous: Kansas is home to the geographic center of the United States (among the 48 mainland states). A small monument near the city of Lebanon marks this spot. The spot is used in the novel American Gods by Neil Gaiman, as a neutral place where warring modern and old gods can meet.

It’s no surprise that one of Kansas’ most famous citizens would have a cocktail named in her honour. What is surprising is that there are so many variations of the drink, with largely the same result. I went with the most common of these recipes and it made for a good beverage.