Sometimes, grapefruits are used to describe a person’s bravery… as in that dude has some huge grapefruits on him. Today we look at some of the most courageous actions the Sip Advisor has taken in his life. While none were earth shattering, they helped form the person I am today:

Moving in a somewhat chronological order, when the Sip Advisor was 12, I had my right kidney removed, as it was not functioning properly. Major surgery when you’re that young can be hard, but it’s also a blessing to have the issue dealt with early on, before it does even more damage. I think I took the whole thing pretty well and the scar can provide an interesting talking point. 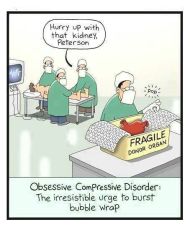 On mutual family trips to Disneyland, I mustered all the swagger I could and asked Mrs. Sip out on a date in front of Cinderella’s Castle during the nightly fireworks extravaganza. The moment was perfect and she couldn’t say no. Had she turned me down, not only would that have stung bad, but it would have probably ruined one of my favourite places in the world. Luckily, we’re still together 15 years later.

Leaving all the comforts you have always known can be a daunting task. On two different occasions, I packed up my belongings and ventured to other parts of the world for new adventures. I spent a semester in Preston, England as part of an exchange program, before later moving to Toronto, Canada for a year-long school course. Both journeys made me much more confident.

Along with Mrs. Sip, I have journeyed to 51 different countries across the globe, including some that aren’t as safe and settled as others. With each expedition, insight has been gained about how other parts of the world operate. There are many more places on my wish list, though, so this courageous enterprise will never be fully achieved. 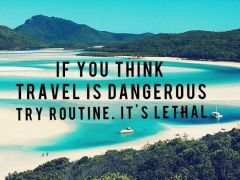 The Sip Advisor can have a bit of a reckless spirit, doing crazy things like leaping off of high platforms (sometimes tethered to a bungee cord) into watery depths below. Some highlights have included jumping off the Auckland Bridge in New Zealand, swimming in the Devil’s Pool on the border of Zambia and Zimbabwe, and ziplining in multiple locales.

While it always remains in the background of my psyche, I can proudly say that I’ve conquered anxiety issues on three separate occasions in my life. For me, anxiety has largely been a fear of fear. It has been brought on by different circumstances and while each occurrence is tough, I have always worked through and made it out the other end stronger.

Through my life, I haven’t really been around babies, meaning I’d never changed a diaper, fed a little one, and rarely even held a baby. So, taking the leap into fatherhood recently has certainly been an eye opener. It’s also been an awesome experience, despite the sleep deprivation, second guessing and unsolicited advice from all angles. I wouldn’t change a thing!

Perhaps one day I’ll be viewed in a similar vein to Sir Ranulph Fiennes, recognized as the bravest man in the world. If not, I’m still happy with my own accomplishments!

Sip Advisor Bar Notes (4 Sips out of 5):
This drink is very good and has brought me around to the Grapefruit Juice bandwagon. I’m particularly impressed with the Maraschino Liqueur. Ernest Hemingway was onto something!