Up until recently, I didn’t realize Watermelon Soda was part of the Crush pop line or even existed. Given I love watermelon, this was a very happy discovery and I instantly grabbed a bottle. Much like this watermelon-based soft drink seemed mythical, let’s take a look at some legends meant to explain the existence of watermelons:

Our first origin story comes from Vietnam, where a young prince angered his father, the king, and was banished to a deserted island. There, he found a fruit that he feared was poisonous and only consumed when all other options were gone. The fruit was tasty and extinguished his thirst. The prince then cultivated the fruit, which spread across the island. He also sent some of the fruit drifting into the sea, with his name and the island’s name carved into them. This brought others to the island, in search of the fruit. The king learned of his son’s achievements and invited him home, crowning him the next king. 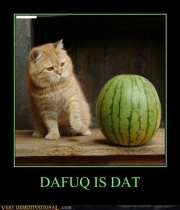 Moving on to Armenia, this tale begins with a king’s servants cutting a snake’s horns off, in order to save it. As a thank you, the snake left a seed at the palace. From the seed, grew a new fruit, which was offered to an ailing old man, saving his life. The king tried the fruit next and felt invigorated. Thus, Armenians called watermelon “Not-Die”, once upon a time. I’m conflicted on this legend. On one hand, I don’t think I would ever be inclined to save a snake, but would rather chop its head off. On the other hand, the servants heroic efforts resulted in the creation of watermelon, so can I really fault them?

Passion of the Priest

We’ll wrap things up with a journey to the Philippines, where a Spanish priest was working hard to convert folks to Catholicism. One particular area was resistant to the priest’s teachings about Christ and his sacrifices. The ruler of this region eventually detained the priest and punished him according to his lessons, crucifying him on a cross. The priest succumbed to this treatment and his blood flowed into the ground below. When the ruler later returned to the cross, the priest had disappeared and in his place, a fruit had grown, its innards resembling the blood of the priest. And that’s how people get converted!

There is also a legend of vampire watermelons (and pumpkins), but I’ll let you look into that yourselves…

Sip Advisor Bar Notes (4.5 Sips out of 5):
For this recipe, I’ve subbed Watermelon Soda and Peach Juice in place of Watermelon and Peach Pieces, respectively. I also used the last of my Bear Hug Mango Rum to up the melon content and the result was very, very good. It may be a little sweet, but that can be evened out by Club Soda. The Watermelon Soda is nice on its own, reminding me of a 7-11 Slurpee.