There are so many idioms that involve apples. No other fruit is used so frequently to convey completely unrelated ideas

An apple a day keeps the doctor away

I’d imagine this phrase was invented by the apple farmer’s industry, looking to boost sales and profit off of people’s anxiety. 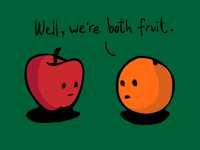 The apple of my eye

This is certainly how Mrs. Sip views me, as someone she cherishes above everyone else. Wishful thinking, perhaps!?

Of all folks, it was a sports writer who first gave New York the nickname the Big Apple, when referring to the horse racing scene and all the money available from it in the city.

I’d like to think that I’m a good apple among many bad/rotten apples in this world, but maybe there’s a little bruising on the ol’ Sip Advisor, too.

Did you know that this expression has an abbreviation (HDYLTA), which is pronounced ‘huduyuluta’? I wish I could say that I made that up for this article. Anyhoo, the rhetorical phrase may come from the British use of ‘Toffee Apple’ trench mortars in World War I.

The apple never falls far from the tree

While using fruit to compare fathers/sons or mothers/daughters seems apropos, when you pick up said apple and throw it far away from the tree, that’s when you get estranged fruit/family.

As American as apple pie

Not to offend any of my American readers, but I always thought of the US as a state fair deep-fried dessert kind of country. Us Canadians call dibs on the majestic donut, though.

Regardless of how the song goes, it’s been scientifically proven that one bad apple does in fact spoil a whole group of the fruit.

Just like this site has been attempting to do since its launch, we aim to disturb the status quo and change the cocktail world… for the better, of course.

Sip Advisor Bar Notes (3.25 Sips out of 5):
I made this cocktail even dirtier, going with my Chili Chocolate version of Kahlua for an added touch of spice. I also subbed in Apple Lime Juice, which has been a trusted mixer for the Sip Advisor for years. The drink turned out pretty well.