Today, we’ll be combining two different mixers, Lemonade and Iced Tea (known as an Arnold Palmer). The pair work together so well, it got me thinking about all the other duos out there that deserve recognition for their continued success as a tandem:

While Batman often works alone, his partnership with young ward Robin has also been beneficial to the citizens of Gotham City, who despite all they have experienced, still choose to call the dangerous metropolis home. While the two usually exhibit a mentor-pupil bond, Robin has been known to break out on his own, thanks to the tutelage of the Caped Crusader. 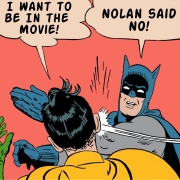 The long-time “roommates” may not have a perfect relationship, but their friendship has endured for close to 50 years, even after all of Bert’s frustration with Ernie. Can you blame him? Imagine you had a friend/partner who took up the bathroom for hours, playing with a rubber ducky. Neat fact, Bert & Ernie were the only two Muppets to appear in the Sesame Street pilot, launching the franchise.

Where one appears, the other is surely to follow. Typically set against each other, I always enjoyed those rare moments when the two put aside their differences and teamed together. I may have been in the minority on that, though. The duo even inspired Itchy & Scratchy of The Simpsons fame, who managed to take cartoon violence up a whole lot of notches.

This duo’s love of insanely immense meals and mutual dislike of mysteries made them friends for life (as seen through the A Pup Named Scooby Doo series). They’re such a close pair that Shaggy can even understand Scooby, despite the latter being a completely different species. The one time I tried talking to my pets, I was given horrible looks. We did managed to solve a mystery, though.

Speaking of sleuth tandems, Sherlock Holmes is perhaps the greatest private investigator to ever live… and Dr. Watson has always been by his side, recording the cases. Watson chips in from time to time, but it’s Holmes brilliance that makes the team so successful. Watson does play a vital role in keeping Holmes in check and in some versions, providing some necessary muscle.

Whenever Mrs. Sip asks me what I want to do that night, I quickly respond: “Try to take over the world!” Yeah, I’m a real peach to live with. The line is all thanks to these lab mice, who continually try to leave their Acme Labs cage behind, in favour of world dominance. And, while you’d expect Pinky to cause the downfall of most of their schemes, it’s actually The Brain who is often to blame. 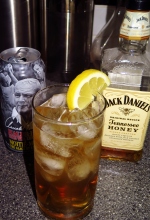 Honourable mentions go to Lucy & Ethel (I Love Lucy), Wayne & Garth (Wayne’s World), Beavis & Butt-head, and Penn & Teller, to name a few. Of course, this list doesn’t even include pairs from the sports world, which would be a whole different article.

Sip Advisor Bar Notes (3.5 Sips out of 5):
I was hoping to use a slightly more complex recipe, but surprisingly couldn’t find many options for the Arnold Palmer Half & Half. That said, this drink was very refreshing and my decision to use Jack Daniels Honey Whiskey certainly paid off.