Each month, as part of this 366-day BC craft beer extravaganza that I will be sharing with you throughout 2016, I will highlight a specific style or theme of beers for a whole week of articles. Already the best time of the year, the fact it’s Winter Ale season makes it that much better.

With a logo featuring Central City Brewing’s red-headed mascot still aboard her familiar bike, but for the season, decked out in gloves and earmuffs, you know this selection was made for winter drinking. The Sip Advisor is only too happy to oblige.

The Red Racer Winter Ale combines flavours of vanilla and maple syrup with notes of spice. The 6% ABV beverage is to be enjoyed while only partially chilled, as recommended by the brewery. The overall effect is a warming finish that will help drinkers get through the chilly weather. 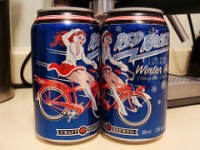 The beer can be found in bomber-sized bottles at private liquor stores. It is also included in Central City’s Season’s Greetings advent calendar (in partnership with Parallel 49 Brewing). Oddly, when I popped into their Surrey brewery and store in November, I wasn’t able to locate the beer then.

One of Central City’s most popular products also hits shelves this time of year: Thor’s Hammer Barley Wine. ‘Tis the season for barley wines, which I haven’t got into previously, but one brought back from Colorado by Ma and Pa Sip may have opened that door.