In preparation for our annual Sip Syndicate camping excursion, the Sip Advisor was on the lookout for a good mixed case of canned beers, perfect for beach drinking. That was found thanks to Fernie Brewing.

Part of the company’s Summer Craft Collection, Mrs. Sip and I generally enjoyed the entire set (no duds to be found); however, we were particularly fond of the Big Caboose Red Ale. The 5% ABV, 25 IBUs beverage took home gold and bronze medals at the 2012 and 2013 BC Beer Awards, respectively, in the Scottish/Irish brew category. 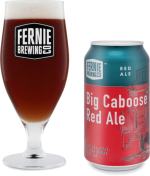 Originally released in 2011, the beer is also available in six-packs and can be found as far east as Manitoba. Suggested food pairings include burgers and nachos… what more could one ask for?