Recently, the Sip Advisor found himself in unfamiliar territory, returning some personal items to a friend. But hey, at least there was a liquor store as part of the complex that I could use as a meeting point. That’s where I found this tantalizing release from Spinnakers Brewing.

The Orange Karma Oatmeal Cream Ale instantly caught my eye, thanks to its intriguing mix of ingredients. At 5.3% ABV and 50 IBUs, the result is a creamy fruit ale, with touches of spice and a smooth, hoppy finish. The orange flavours isn’t overwhelming, which lets the other elements shine, as well. 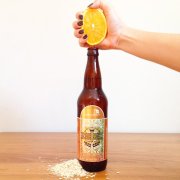 Named after the Spinnakers brewery dog, Karma, the beer is available in bomber-sized bottles at private liquor stores. The product was first released in the fall of 2015, before making a summer return this year. I’m just happy I was able to track a bottle down.

For craft beer fans out there, my best advice for finding new and interesting stuff to try is to mix things up. BC Liquor Stores are great, but private shops can offer more selection and the price difference isn’t too bad. Also, some bars can have fantastic brew lineups.