Each month, as part of this 366-day BC craft beer extravaganza that I will be sharing with you throughout 2016, I will highlight a specific style or theme of beers for a whole week of articles. Mrs. Sip and I are huge fans of hefeweizens and witbiers. I mean, is there a better summer beer style? Let’s take a look at what BC has to offer in the field.

Always on the lookout for new and interesting hefeweizens/wheat beers (after all, they are not only among my favourite, but I can score serious points with Mrs. Sip when unearthing a new option), when I first came across this massive offering from Howe Sound Brewing, angels rejoiced and a heavenly light shined upon me.

The King Heffy is an Unfiltered Imperial Hefeweizen, featuring flavours of banana, clove and vanilla. This summer seasonal is strong (7.7% ABV) and flavourful, but also easy drinking at only 20 IBUs. 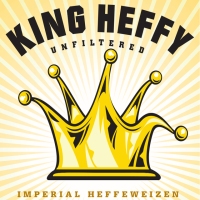 This beer is named for the King of Hefeweizens and best of all, for those summer days when you worry about running low on suds, the King Heffy comes in Howe Sound’s trademark one-litre bottles. Given its size and girth, King Heffy is a name that is well-earned.

The King Heffy has been honoured with medals from both the North American Brewing Awards (gold and silver), as well as the Canadian Brewing Awards (bronze). Sticking with wheat beers, Howe Sound also has the You’re My Boy Blue Blueberry Wheat Ale and Whitecap Wheat Ale, among their wares.