On a recent Friday night drinking session – because why the hell not! – Cousin Sip brought over a bomber of this flagship beer from Barkerville Brewing.

The 18 Karat Ale plays on Barkerville’s history of being a former gold rush hub, although the brewery actually operates out of nearby Quesnel. Given the brew’s name, you’d expect a golden-hued beverage, but the beer is, in fact, an Amber Ale. We’ll let that pass, though, as the 5% ABV, 33 IBUs product is solid. 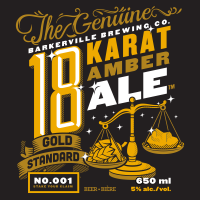 The beer received silver and bronze medals, respectively, at the 2014 and 2015 Canadian Brewing Awards in the North American Style Amber/Red Ale category.

As you can probably tell, the Sip Advisor is a fan of the gold rush theming and I like Barkerville’s description of this release: “Known as underground savages, prospectors of the BC gold rush were rewarded handsomely for their toil. Rumour has it that, in the saloons of Barkerville, there was so much gold dust shed from miner’s clothes that a profit could be made just by sweeping the floor. Cash in with 18 Karat Ale, a smooth and balanced blend of malted barley and hops that will lure you back for the mother lode.”