Each month, as part of this 366-day BC craft beer extravaganza that I will be sharing with you throughout 2016, I will highlight a specific style or theme of beers for a whole week of articles. It may have taken some time, but IPA’s now rank among my favourite styles of beer. Let’s take a look at some of the best BC has to offer, among this acquired taste.

As IPA week continues to roll along, we go to Four Winds Brewing and profile my favourite beer from the company.

The Juxtapose Brett IPA provides a nice balance between the hoppy IPA and sour Brett varieties and comes in at 6.5% ABV and 50 IBUs. The name is perfect in that two diverse types are placed together for contrast. As Four Winds writes, this is “where orchards meet pastures.” I’ve found lately that I really enjoy the Brett-style IPAs and it’s probably my favourite foray into sour territory. 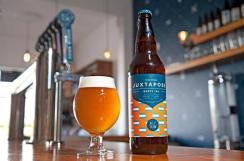 This limited release (I wish it was available year round) is available on tap and in 650ml bomber bottles. I found the beer to be perfect during barbecue season, pairing well with much of the fare you expect from summer gatherings. Juxtapose has won a silver medal at the 2014 World Beer Cup in the American-Style Brett Beer category and a bronze medal at the 2014 BC Beer Awards in the Belgian/French Beer class.

I really should make more of a point of visiting Four Winds, based in my original hometown of Delta. They do some really neat stuff, their tasting room is fantastic, and it’s located close to Ma and Pa Sip’s place. What more could a beer lover ask for!?