Each month, as part of this 366-day BC craft beer extravaganza that I will be sharing with you throughout 2016, I will highlight a specific style or theme of beers for a whole week of articles. Since March features St. Patrick’s Day and many of us largely associate the celebration with Guinness beer, the Sip Advisor thought it would be a prime month to highlight some of B.C.’s best stout beers.

When Mrs. Sip and I attended Big Rock Urban Brewery’s Winter Beer Hall (as part of the Dine Out Vancouver Festival), one of my favourite servings of the night, among the cask beers available, was from Doan’s Craft Brewing.

Their Rye Stout came out near the top of my card, among stiff competition in the form of Storm Brewing’s Vanilla Whiskey Stout and Big Rock’s Dine Out Van Fest Ale. The 6.2% brew is made by soaking malts in Canadian Rye, resulting in a spicy, hoppy drink, which has a strong, but not detestable coffee aftertaste. 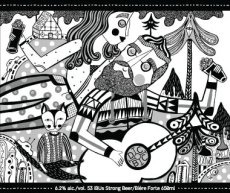 It helped to have one of Doan’s brewers on site at the event to describe to drinkers how the beer was made, as well as provide other little tidbits about the beverage.

When we visited Doan’s for the very first time last summer, I don’t remember being won over by the brewery. That could have been because it was stop number five or six for us that day and palate fatigue could have been setting in. Regardless, thanks to this experience, I have renewed faith in the company and look forward to my next chance to return to their tasting room.