While recently dining out at Wild Tale in Yaletown, Mrs. Sip and I took advantage of their happy hour drink deals. On the beer side of that ledger was selections from Stanley Park Brewing and I was happy to place an order.

I really enjoyed my servings of the Stanley Park Pale Ale, which were paired with our lobster dinner, featuring items such as seafood chowder, mussels, trio of salads (potato, coleslaw and mixed greens), one and a half pounds of lobster, and dessert. I felt the Pale Ale partnered best with the chowder and salads, but it wasn’t out of place with the other meal items, either. The brewery suggests pairings of grilled steak, citrus salad, Thai curry, and roasted vegetables. 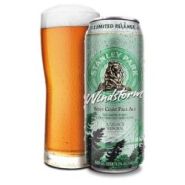 The beer comes in at 5.7% and 35 IBU, which seems like just the right balance to me. Named Windstorm because of the 2006 squall that may have damaged Stanley Park, but inspired generations of British Columbians to repair and preserve the grounds, the company donates some proceeds from each sale of this brew to the Stanley Park Ecology Society, which provides upkeep of the landmark as well as “promotes awareness of and respect for the natural world”.

Stanley Park Brewing (under the banner of the Turning Point Brewing Company) has received criticism in the past because it operates more like a macro-brewery; have taken their name from an original brewery that operated back in 1897; and doesn’t have some of the intimate features we’ve all come to expect from craft breweries, such as a tasting room. There’s also been an issue with the company being called Stanley Park, but being located in Delta.

Despite all this, I have tasted some of their smaller batch stuff and have really liked it. Add to that their regular line-up containing some good brews and it’s at least worth trying for yourself and seeing whether or not you like it.