Some people are really into haunted houses, buildings, and areas, but the Sip Advisor would prefer to keep his distance from any ghostly dwelling that is not located at a Disney theme park. That said, these places can be incredibly fascinating and I don’t mind learning about them from a distance. Here are some of the most haunted places around the world:

Can you imagine an island being so haunted that it has been abandoned? Such is the case for Poveglia Island, which sits near the maze-like port city of Venice. During the days of the Bubonic Plague and later the Black Death, Poveglia became a quarantine site, where countless numbers of sick folks were sent to die. These unfortunate souls are said to haunt the island, while there are also rumours of an asylum existing on Poveglia, during the 1800’s, where patients were treated horribly. Locals will not go to the island, believing that they will be cursed if they go ashore and fisherman will not work in the area, with fears that they will unearth dead bodies in their operations. 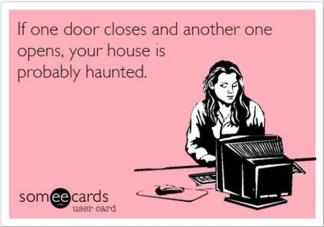 Despite a history dating back more than 200 years, one wouldn’t naturally think of the American president’s residence as a site of ghostly activity, but it is in fact home to countless paranormal doings and is one of the country’s most haunted homes. Among some of the sights and sounds witnessed at the White House are Abraham Lincoln standing by the fire in the bedroom named after him; Andrew Jackson laughing or swearing up a storm in the Rose Room; and Abigail Adams floating through the East Room, where she hung the presidential laundry. And nothing is spookier than soiled undergarments!

I always like to get some Canadian content into these articles and the Banff Springs Hotel seems like the perfect location to achieve that, thanks to tales of a family being murdered in room 873 (which has since been blocked off by bricks) and a tragic bride, who is often seen with flames coming from her wedding dress. Finally, there’s the ghost of Sam Macauley, the resort’s former bellman. Apparently, his spirit has remained on the job, helping guests to their rooms, while even unlocking doors and turning lights on. He only disappears when visitors try to tip him or make conversation with him. That’s my kind of bellman! While lacking the sex and murder of American Horror Story: Hotel, this site is still pretty damn spooky.

Home to some of the most gruesome events in history, the Tower of London is a must-see attraction when visiting the metropolis… but you might get more than you bargained for (even with the pound’s exchange rate!). Some of the Tower’s ghostly inhabitants are quite infamous, including Anne Boleyn, who was beheaded in 1536 and has been seen roaming the site sans skull. Another area of serious paranormal activity is the attraction’s White Tower, where two small children have been spotted on numerous occasions. It’s rumoured that the apparitions are former princes that were deemed illegitimate and murdered, their skeletons found underneath a staircase.

Globally known as the Suicide Forest (as if that wasn’t enough to send chills down your spine), this woodland, located at the base of Mount Fuji is believed to be haunted by those that ended their lives amongst the overgrowth. The forest has become such a popular suicide spot – averaging 100 suicides each year – that signs can be found at entrances to the forest, pleading with distraught people, reading: “Your life is a precious gift to your parents” and “Please consult with the police before you decide to die”. A yearly body search is performed by police and volunteers, to clear the forest of remains.

Writing this article confirms that the only spirits I want any experience with are of the alcohol variety! Have I missed a favourite haunted locale of yours? Let me know, although I may leave the ghostbusting to you!