As a good half-German boy, Ma Sip was always proud that I grew up a fan of marzipan… at least until I ate too much of it one Christmas. I still like the stuff, but only in small doses now. Despite my appreciation, I’m surprised that marzipan has its own national day (January 12th). As crazy as that is, there are other holidays that seem even more obscure:

Celebrated every September 24th, as a writer, I must admit that I’m a fan of exclamation marks, commas, ellipses, and everything in between. To imbibe on National Punctuation Day, it’s suggested that people read a newspaper and mark all the punctuation mistakes or record store signs that have similar errors. Sounds like an off-the-hook way to praise those beautiful sentence accentuations.

I hate weather people… I’ve even written an article on the subject. February 5th seems an odd day to celebrate weather people, since it’s at a time of year when they could really bungle the forecast. Why not celebrate these duds in the summer, when their predictions are a little more accurate. How hard is it to say sunny and hot, am I right!?

My only complaint with this holiday is that it took so long to come into existence. Why are we supposed to only give tribute to breasts on one day of the calendar? And I have to ask, are we also celebrating the male breast? No, of course we’re not. There is also National Cleavage Day, sponsored by Wonderbra and held in South Africa, in either March or April of each year.

Now, is this a day for committing stupid acts and getting away with it, or honouring the great men of stupidity that have come before us? In a similar vein, you could celebrate “Blame Someone Else Day” after executing an act of extreme stupidity and passing the liability off to some other schlub. Mrs. Sip will attest that International Stupidity Day occurs nearly every day of the calendar in our home! 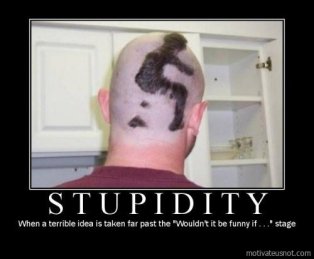 I salute the VCR for the many years of enjoyment it provided me as a youngster, but the platform has been extinct for just as long of my life as it was part of it. March 2nd is National Old Stuff Day, so people could try going to closed down video rental stores, while listening to their Walkman or Discman, perhaps even while rocking some of those ancient roller skates from the land before time!

Be Late for Something Day

Let’s hope Mrs. Sip doesn’t read this article and learn that there is a national observance for something she does practically every day of her life. The Sip Advisor is a punctual person, so it has always been frustrating to be dating, engaged, and finally married to someone who has absolutely no concept of time. At least she’s beautiful and is a spokesperson for the aforementioned International Breast Day!

The German city of Lubeck is the hub of marzipan production, where local legend dictates the food was created there, likely during a famine, where all that remained was almonds and sugar. Regardless of the accuracy of that tale, we must thank them for their tireless efforts!

Sip Advisor Bar Notes (4 Sips out of 5):
This martini was very good as a dessert option. The Marzipan Liqueur is like a creamy version of Amaretto, while the other liquors added some complexity to the beverage’s taste.