Recently, we looked at some of the most notable Canadian patriots and icons, in RL (that means real life!). Today, we enter the fictional world and examine some of the greatest contributions to this country’s (and outside its borders) culture, from persons who have never actually existed:

While many have probably not heard of Northstar, he is an important figure in comic history and LGBT culture. A member of the Canadian Alpha Flight team (also featuring his sister Aurora and other members, such as Guardian, Sasquatch, Shaman, and Snowbird), Northstar gained notoriety for being the first openly gay major character created by Marvel Comics. Despite debuting in April 1979, Northstar didn’t officially come out until 1992. The superhero was finally allowed to marry his partner 20 years later, in 2012.

These two hosers got their beginning on the SCTV sketch comedy show, leading to a feature film, Strange Brew, in which they are thrust into becoming unlikely heroes, trying to save their favourite brewery. If that’s not a definitive Canadian story, I don’t know what is! These roles launched the careers of both Rick Moranis and Dave Thomas. In a great casting choice, Disney reunited the McKenzie brothers to play a pair of comical moose, Rutt and Tuke, in the movie Brother Bear, also set in the Canadian wilderness.

Ike is the adopted brother of Kyle, born in Canada as Peter Gints. As the main characters have aged, so has Ike, who is now in kindergarten, despite being only three years old.  Any episode that revolves around Ike is usually pretty good, whether he’s entered into a relationship with his adult teacher, is going through early puberty, caused by steroid, or is saving the Canadian Princess (wait, we have one of those?).  Crude TV stars Terrence and Phillip are also Canadian, which is why the folks of South Park, Colorado aren’t too happy with their neighbours from the north! 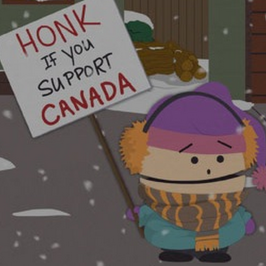 Julian, Ricky, Bubbles, and the rest of the gang seem to always be getting themselves into trouble, as they move from one get-rich-quick scheme to another, trying to avoid the capture of police and Sunnyvale Trailer Park disciplinarian Mr. Lahey and his partner in crime (and other things) Randy. Set in Dartmouth, Nova Scotia, this mockumentary shows the love that can develop between folks stuck in hard times, as they scratch and claw their way towards better lives, sometimes taking shortcuts, rather than conventional means.

One of the most rugged, bad ass superheroes has Canadian blood running through his veins… well, that and adamantium bones! Wolverine debuted all the way back in 1974 and over the rest of the decade, grew in popularity, leading to his own four-part series in 1982. The character has proven to be so prevalent, that he has been the focal point of numerous movies for the franchise. Wolverine’s on-again, off-again enemy Sabretooth also hails from Canada, as does Deadpool, who has been previously played by Canadian actor Ryan Reynolds, and will be again in the 2016 eponymous feature film.

In closing, I have to include an honourable mention for Anne Shirley (better known as Anne of Green Gables), or else Mrs. Sip might strip me (wait for it) of my Canadian citizenship! Next week, we get to look at the fictional patriots from south of the border… and there are a lot of them!