Well, this article might get a little dicey, so viewer’s discretion is advised. Simply put, rhubarb contains a number of laxative properties, which somehow got me thinking of the greatest laxative scenes in movies. Don’t ask me to explain how my mind works… I don’t get it, either. Well, might as well get this story started:

After Lloyd discovers that his best friend Harry is going out with the girl he has a massive crush on, Lloyd decides to spike Harry’s drink with a laxative… and lots of it! En route to another date, Harry starts to feel a rumble in his tummy. When he arrives at Mary Swanson’s home, Harry is in serious need of a washroom. He does his business, but the hilarity goes up another couple notches when it’s revealed that the toilet Harry has been using is broken. This begs the question: What would you do!? It’s a question that has haunted the Sip Advisor and many I know for two decades. Answers may vary, but in the end, you’d have to assume that things would get much worse, before they got any better.

Poor, poor Finch. The teen has made it his mission to never use the school washrooms, fearing how unhygienic they might be. In fact, if he has the urge to use the facilities, he runs home during the break between classes to do his business. Finch’s plans go awry when Stifler spikes his drink with a laxative, angry that girls throughout the school are turning him down for a date to the prom, hoping Finch will ask them. Like Harry and the broken toilet in Dumb & Dumber, Finch can’t seem to buy a break, getting tricked into using the girl’s washroom to relieve himself. This results in no date at all for Finch, but he does get back at Stifler by having sex with his mom. Sounds like a fair trade!

There is nothing worse than desperately needing the use of a bathroom, when you aren’t able to access one or have other obstacles in your way. This plays into a scene in Van Wilder when Gwen Pearson (Tara Reid) slips some laxatives into her boyfriend Richard’s drink, upon learning that he cheated on her and got Van Wilder in some hot water with the school and police. While writing an exam, the symptoms begin to hit and things go from bad to worse as Richard races through the test and tries in vain to reach a toilet. The guy eventually uses a garbage can (hey, things could have been worse), while still in the public eye. That sounds like an apt punishment for betrayal! 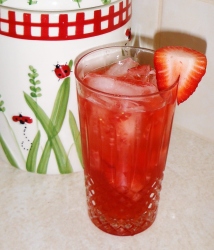 There’s actually an area known as the Rhubarb Triangle in the West Yorkshire area of England. I only hope they’ve constructed enough washrooms in the zone to make sure any visitors are covered, should they imbibe in rhubarb treats.

Sip Advisor Bar Notes (4 Sips out of 5):
This was a pretty good cocktail, one of the drink ideas found on those little bottle attachments that I love so much. Although I hate when they bother to include a little recipe booklet and all the options are plain and suck. I mean, why bother. The Rhubarb Tea Liqueur was not like this. Anyhoo, I believe this is the first time the Sip Advisor has ever used Rhubarb anything and it was a hit. Ma Sip is already looking to make this her summer cocktail, later this year.