In celebration of Valentine’s Day, I thought it would be a good opportunity to look at some of the classic “will they/won’t they” TV romances. Nearly every show has one, hoping to bring in the hopeless romantic as a regular viewer. My favourite story is from NewsRadio, where the network wanted this element for the show, much to the chagrin of producers. So, they had Dave and Lisa sleep together immediately, before then teasing their relationship from that point. Well, on with the list:

The Parks and Rec crew are quite incestuous with numerous couplings coming out of the small department. Despite stiff competition (Andy and April, Chris and Ann, etc.), Ben and Leslie get the nod for best “will they/won’t they” storyline on the show, as it took the nerdy Ben to finally reel in the ambitious Leslie, who was more likely to be married to her job than a living person. Ben and Leslie’s wedding was especially touching, as the Parks and Rec crew had to stage the event on short notice. 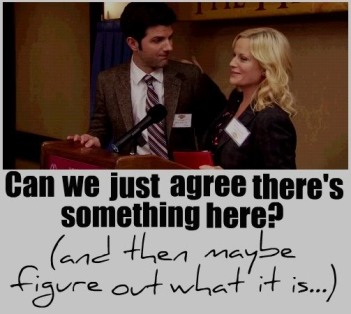 Niles loved Daphne from the first moment he saw her… the problem was, he was in a loveless marriage with the never-seen Maris. By the time Niles got his side of things all sorted out, Daphne was due to be wed to Donny – ironically, Niles divorce attorney. Well, true love conquers all, and Niles and Daphne ended up together, marrying and having a baby boy. Poor Niles waited many years – and through many boyfriends – for his chance to be with Daphne, but fate works in mysterious ways.

For those who believe that opposites don’t attract, take for example the relationship between blonde bombshell Penny and her kind, but geeky neighbour Leonard. Despite taking a while to date and an extended break-up, the two have been together for a fair portion of the show’s run and at this point are even engaged. Rivaling Leonard and Penny is Sheldon and Amy, who most fans just want to see finally get into bed with one another! 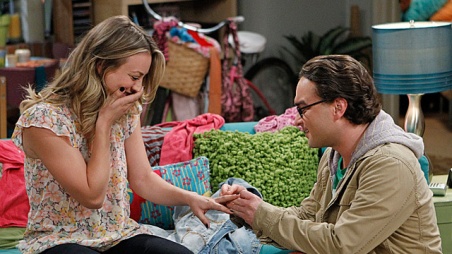 Based off of the similar storyline of Tim and Dawn from the UK version of The Office, Jim and Pam go from co-workers with a mutual crush to lovers, having to evade obstacles such as Pam’s pending marriage to Roy, Jim’s transfer to another Dunder Mifflin branch, and Pam going back to school in New York. Once Jim and Pam were all securely married, Dwight and Angela moved into the spot of “will they/won’t they,” but their relationship was always a little odd and unusual.

These two went back and forth so many times, that it makes one’s head spin. In the end, they of course wound up with each other, following the typical last-minute ditch effort to save the relationship, with Ross rushing to the airport to stop Rachel from leaving the country for a job opportunity in Paris. Through the series, the two even produced a child, all the while teasing a reunion, but never really getting back together from the first time they became a couple and broke up. 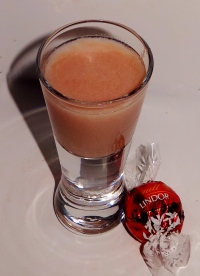 Honourable mentions go to Kevin and Winnie (The Wonder Years), Zack and Kelly (Saved by the Bell), Eric and Donna (That 70’s Show), and Fry and Leela (Futurama); some of which ended happily and others, not so much. Thankfully, my will they/won’t they with Mrs. Sip worked out pretty well!

Sip Advisor Bar Notes (2.5 Sips out of 5):
The Cherry and Orange Liqueurs mixed together really well, but the Milk didn’t play nicely with the spirits, nearly curdling the alcohol. Luckily it didn’t get that far and the flavours could still be enjoyed. At least I always had the Chocolate garnish to enjoy afterwards!