With the arrival of December, it’s time to reflect on the year that was. While most stories only hit the mainstream when they’re of the negative variety, there are some groups and people that had amazing calendar years. Here are the folks that had the best 2014:

The Canadian Men’s Olympic hockey team has the utmost pressure on them each and every Winter Games. While Russia, as event hosts, would have loved to walk away with the gold, hockey is Canada’s game and anything but a tournament victory would not have sat well with the entire country. Therefore, it was much more palatable to watch the gold medal game, starting at 4am Vancouver time, when the boys easily defeated Sweden 3-0. It should also be noted that the Canadian Women’s Olympic hockey team took home gold, as well, thanks to some last minute heroics.

It was the fad of the 2014 summer and it was about more than cooling off and finding relief from the heat. If you were nominated to participate, you typically had 24 hours to dump a bucket of water/ice on your melon, before challenging the next round of participants. Whether you completed the task or not, you were encouraged to donate to charity. While not everyone agreed with the movement – citing the lack of money that would actually go towards curing ALS, the waste of water, health issues the challenge could result in, etc. – the Ice Bucket Challenge certainly raised the profile of ALS around the world. Mission: Accomplished!

Winners of the 2014 World Cup of Soccer (which I predicted from the start!), Germans will hold football bragging rights until at least the 2018 contest in Russia. Mario Götze, who scored the lone goal for Germany against Argentina, to clinch the title, will be a national icon for the country for the duration of his life, and likely, long after. Germany went undefeated through the World Cup, highlighted by a 7-1 drubbing of host county and competition favourites Brazil, in the semi-finals. At the same tournament, Costa Rica became underdog fan favourites with stunning defeats over Uruguay, Italy, and Greece, before bowing out to the Netherlands on penalty kicks. 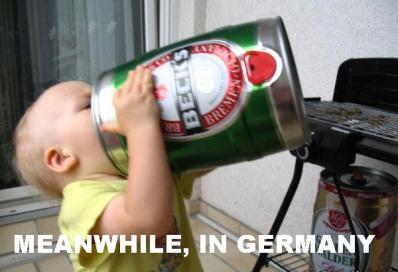 Thanks to his HBO series, Last Week Tonight, John Oliver is quickly becoming the most trusted source in news. That’s pretty good standing, given he’s a comedian anchor and his show is largely centered on making fun of the news. Mrs. Sip and I have enjoyed Oliver’s segments on FIFA, Scottish independence, student debt, and Middle East translators, among others. Oliver’s HBO contract runs through 2015 with the option for more years. And to think, all of this largely came about because Oliver was the guest host of The Daily Show in the summer of 2013, leading to rave reviews and his own program.

With two monster hit movies – The LEGO Movie and Guardians of the Galaxy (third and first, respectively, in highest grossing films of the year) – to go along with his role as goofy, loveable Andy Dwyer on Parks and Recreation, Chris Pratt is riding high in 2014 and the sky is the limits for this talented actor. Thanks to his success, Pratt was tapped to host the season premiere of Saturday Night Live, in September. 2015 could see his star continue to rise, as he will play the lead in Jurassic World, the next installment in the Jurassic Park franchise, as well as wrap up Parks and Recreation with a 13-episode seventh and final season.

Of course, the Sip Advisor could have also topped this list after yet another rock n’ roll year, but I’ll let the others have the spotlight! Next week, we tackle those that had a horrendous time in 2014 and probably can’t wait to see the year come to an end.

Sip Advisor Bar Notes (4 Sips out of 5):
Simply layer the Jagermeister on top of the Goldschalger and you have an oil find that would make Jed Clampett blush! I think this shooter turned out pretty well image wise… the taste wasn’t bad, to boot!