Rugby is New Zealand’s national sport and the All Blacks national team is an intimidating force. First, you have these hulking behemoths and then you add in the Maori war paint and tribal dances meant to scare off opponents… that’s enough to make me forfeit a contest. Let’s learn a little more about this massively popular group:

First things first, we need to investigate the name of this squad. It comes from their all black gear, save for the silver fern across their jersey. In recent years, the All Blacks have also featured an embroidered poppy on their sleeve to salute the New Zealand soldiers who died during the World Wars and other conflicts. Both Adidas and Nike competed to outfit the national team, with Adidas winning the contract, while Nike settled for Tiger Woods. 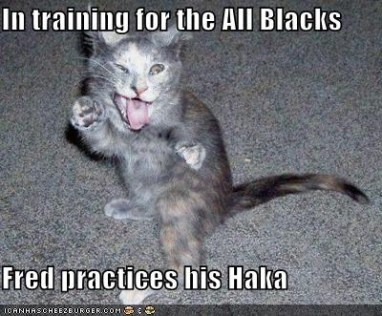 After Charles Monro brought rugby to New Zealand in 1870, what would become the national team was first put together in 1884 for a tour of eight games in New South Wales, Australia. The club went undefeated during that trip. In 1905, the lineup referred to as the Original All Blacks, toured what is now the United Kingdom, winning 34 of 35 matches (their one loss coming controversially) and gaining a reputation as ungentlemanly players.

A dominant team, the All Blacks have won a vast majority of their test matches and have often found themselves at the top of the world rankings (all other nations combined don’t equal the All Blacks time at the top of the table). New Zealand has the only national team that owns a winning record against every team they’ve faced. In their 111-year international history, they have only been defeated by five countries.

With an all-time points differential of 13,572 to 6,615, it’s completely understandable to learn that many countries worst losses in international competition have come at the hands of the All Blacks. France, Ireland, Argentina, Fiji, Samoa, Tonga, Japan, and Portugal are all on this list. The All Blacks largest margin of victory ever was a 145-17 drubbing of Japan on June 4, 1995, while their greatest loss was only 28-7 against Australia on August 28, 1999.

The national team has won the Rugby World Cup twice, taking home the top prize in 1987 (the inaugural event) and 2011. The All Blacks have played in all seven World Cup tournaments and hosted the competition twice. Both times they have hosted (once co-hosting with Australia), they have emerged victorious. In most years, the All Blacks enter the World Cup as the odds-on-favourite.

The Tri Nations Rugby Championship (contested between New Zealand, Australia, South Africa, and later adding Argentina) has been won by the All Blacks 12 times in 18 years. The team has completed the United kingdom Grand Slam – defeating England, Scotland, Ireland, and Wales in the same tour – four times, achieving the feat in 1978, 2005, 2008, and 2010.

The infamous haka dance the All Blacks utilize to rev their engines and strike fear into the hearts of their opponents has been associated with the squad since 1888 and may have been used before then. The most commonly used haka is the Ka Mate. In 2005, the All Blacks unveiled a new haka, the Kapa o Pango, but this included a throat slashing gesture, which has drawn some criticism for the imagery it encourages. 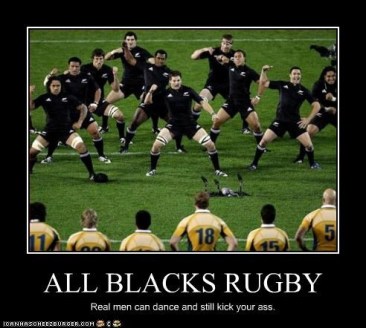 There has been close to 1,200 players to suit up for the national team, with a half dozen or so going on to be knighted or received the Distinguished Companion of the New Zealand Order of Merit, while a handful have been awarded the Rhodes Scholarship. Some of the notable stars of the squad include James Allan (member of the original 1884 team), Dave Gallagher (captain of the Originals), and Sir Fred Allen (former captain and coach).

Don Clarke, Sir Wilson Whineray, Ian Kirkpatrick, Graham Mourie, Sean Fitzpatrick, Dan Carter, Doug Howlett, Christian Cullen, and Jonah Lomu, are among other top players for the national team. Being an All Black runs in the family, as there have been numerous sets of father and sons, as well as pairs of brothers who have suited up and played for the troop.

A devoted fan base follows the national team and why wouldn’t you? It’s fun to regularly be on the winning side. I have to admit that I even bought a mini All Blacks jersey while in New Zealand to go along with my mini Manchester United kit. After years of misery supporting the NHL’s Vancouver Canucks, it’s great to put my support behind teams that, you know, don’t lose so often!

While I’ve never been a huge rugby fan, it’s an exciting game to watch with fast-paced, hard-hitting action. When the All Blacks are on the field, you can bet you’ll see some serious ass whipping and what could be more entertaining than that!?

Sip Advisor Bar Notes (3.5 Sips out of 5):
Just like the All Blacks leave their opponents staring up at the sky, so too will this cocktail… but in a good way. I made this drink for Mrs. Sip and she enjoyed it with her only note of criticism being that it may have been better in a chilled martini glass. Duly noted and next time it will be done!