There are some great characters found in the annuls of Greek mythology. I love shows like Hercules (the Disney cartoon, of course) and Clash of the Titans, which give you a glimpse of the legends, but in a way where you don’t feel you’re actually learning something! Let’s take a look at the most rockin’ gods and goddesses:

The god of gods and a man you would not want to piss off. Some of his punishments are extreme, to put it lightly. To be fair, along with being the god of the sky, weather, thunder, and lightning, Zeus does also cover law, order, and justice. You probably also wouldn’t want to be a woman around Zeus, as the deity had a penchant for banging everything with a pair of legs… although I doubt missing limbs would stop the insatiable one. 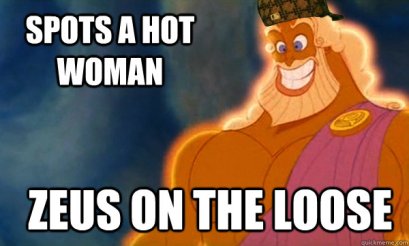 Played by acting icons such as Arnold Schwarzenegger, Lou Ferrigno, Ryan Gosling (Young Hercules) and to a much lesser extent, Kevin Sorbo, numerous performers have taken on the mythical character. Hell, this year alone, there will be two films released on the demi-god, starring The Rock and Kellan Lutz, respectively. An immortal strongman, as a youngster, Hercules even strangled a snake sent to kill him and for that, we thank him.

Lord of the underworld, Hades is also known as the god of regret and every time I don’t yell at someone who deserves a sound verbal thrashing, I am overcome with remorse. Thanks to the Disney version of Hercules, Hades will forever have James Wood’s voice attached to him in my head, telling me to do bad stuff and end up in the underworld, rather than living the sweet life in the heavens… it’s a tough voice to ignore!

Who can’t love this little scamp; the god of wine, parties and festivals, madness, chaos, drunkenness, drugs, and ecstasy. Personally, I think that sounds like a wicked weekend. Dionysus is so much cooler than Demeter, goddess of grain, agriculture, the harvest, growth, and nourishment (although grain is needed to make many alcohols and there’s nothing wrong with a good meal). Why build up your body when Dionysus is offering you all these fun ways to ruin it!

God of war, bloodshed, and violence, without ol’ Ares, we might not have all the awesome sports we enjoy today. Sure, the world would be a safer place, but someone would eventually ruin the peace, so chaos might as well reign. The one thing I can fault Ares with is that his sacred animals includes venomous snakes, which have been noted before as the Sip Advisor’s greatest fear. I am down with Ares moodiness and act first, ask questions later mentality.

This firecracker is often depicted nude or en route to getting there. The goddess of love, beauty, desire, and pleasure, that sounds about as fun as Dionysus and perhaps a weekend under the spell of each of them would be the wildest thing you’d ever experienced. Aphrodite was said to have many lovers and if you were a god, you probably would as well. She can’t be faulted for wanting to get down with her bad self with anyone willing to tango with a goddess. 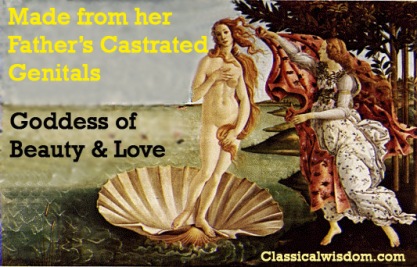 As a writer, I have to give a shout out to Hermes, god of boundaries, travel, communication, trade, language, and writing. I find it odd that the “messenger of the gods” has a sacred animal like the tortoise. You’d think it would be something faster like a cheetah or something. That said, the tortoise did beat the hare, so perhaps it’s more about an accuracy issue. Hermes also guides souls into the afterlife, so he’s a pretty busy dude.

I’ve always been a water enthusiast and therefore I make yearly sacrifices of cannonballs and belly flops to Poseidon, god of sea, rivers, floods, and droughts. The broski of Zeus and Hades, Poseidon lords over all bodies of water. I wonder if this includes toilets, urinals, puddles, and all manner of liquid pooling devices. Can you imagine the all mighty Poseidon showing up in your bathroom stall and pronouncing: “I am king of the crapper and you must respect my authority!” 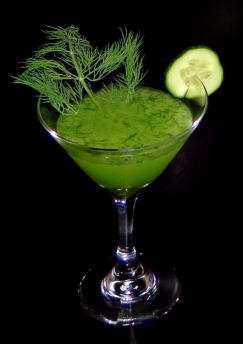 While the examples above are my list of cool gods, the following deities are on the naughty list with reason attached: Hestia (goddess of chastity – no explanation needed), Artemis (goddess of childbirth and the plague – covering both ends of the spectrum), Apollo (god of manly beauty – men should be rugged and ugly), and Athena (goddess of wisdom – who needs it).

Sip Advisor Bar Notes (4 Sips out of 5):
This was my first opportunity to put Dill in a cocktail and it made for a very interesting drink. Throw in the rogue Ouzo and you never really know what you’ll get. For any Cucumber lovers out there (of which, I am one), this is a martini you have to try.