While I’ve chosen cognac as the spirit of choice while visiting France, that doesn’t mean we can’t devote some time to another well-associated libation for the country: champagne. I’m not the biggest fan of the stuff, but Mrs. Sip loves her bubbles and therefore, this article is dedicated to her and her taste in finer things… like the Sip Advisor!

Champagne was discovered accidentally and through a process that makers in the region are still trying to correct. When the cold weather hits this northern area, the fermentation procedure is interrupted and only continues when warm temperatures return while the wine is already bottled. This creates the carbonation and pressure that champagne is known for. 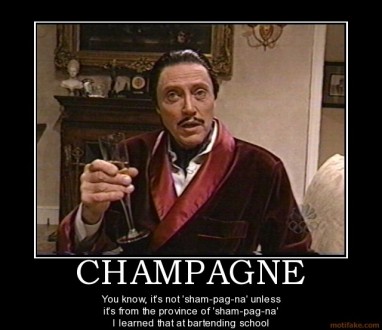 Dom Perignon is often credited with inventing champagne in 1662, but he had some serious help from a British scientist named Christopher Merret, who broke down the process for creating the libation. Also, British bottles were stronger than the French ones and helped eliminate the likelihood of bottles bursting from the intense pressure of the drink.

In fact, the real Dom Perignon (a Benedictine monk) was one of the many who worked hard to prevent the second fermentation that creates champagne. What Perignon can be recognized for is giving champagne its classic colour. Champagne used to have a pale pink hue before Perignon started the process of blending grapes before pressing them, which caused red grapes to produce a white wine.

In 1813, Madame Clicquot Ponsardin created the riddling machine, which greatly improved champagne production and the quality of the product being released. These machines allowed for bottles to be turned upside down in order to have sediment (dead yeast) removed, refining the second fermentation process. The Veuve Clicquot champagne house still exists today.

Only the bottles produced in France’s Champagne region can be classified as champagne. It is known around the world by such other names as bubbly, Prosecco, brut, and sparkling wine. Today there are over 15,000 grape growers in Champagne, working with pinot noir, chardonnay, and pinot meunier grapes.

Although Double-O-7, James Bond, is best associated with the shaken, not stirred martini, in the films, he is most often seen downing champagne. In fact, the secret agent seems to like his bubbles so much, he has consumed close to 40 glasses. Perhaps Bond, the perpetual sex machine, was drawn to the classic champagne glass, which was designed from a wax mold of Marie Antoinette’s breast.

There are about 49 million bubbles in a typical bottle of champagne. Those suds can cause immense pressure in the bottle (90 pounds per square inch), which can launch a cork at 40 miles per hour. The world record for cork flight is 177 feet. Those same bubbles can cause a headache for drinkers, if consumed too quickly, as they cause the alcohol to enter your bloodstream quickly. Take your time with champagne and enjoy the taste of the wine and the cascade of the fizz.

Need more than a normal sized champagne bottle? How about a lot more? The Melchizedek serving provides 30 liters of the good stuff. That’s equivalent to 40 typical bottles. Despite the massive serving, these bottles pale in comparison to the price attached to some selections. The Shipwrecked 1907 Heidseick will set you back $275,000 per bottle. 200 bottles of the champagne were discovered in 1997, after sitting at the bottom of the ocean for 90 years, presumed to have fallen off the ship carrying it.

Champagne can be used for many other purposes. In the 1800s, English nobles used the drink to polish their boots. Many moons later, Marilyn Monroe is reported to have bathed in a tub filled with 350 bottles of champagne. Had they re-bottled the used bath water, they could have made millions. Instead, today we have a Marilyn Monroe-themed strawberries and cream vodka from Three Olives. I think some companies really missed the boat on this one.

Although I don’t love champagne, it is perfect in helping celebrate milestones, triumphs, and even the passing of another day where you made it through alive. Drink up, my little sippers!

Sip Advisor Bar Notes (3 Sips out of 5):
Much like Italy, there are a number of liquor options available for France. I went with Cognac because it seemed like a nice way to change things up with this project. This is the Cognac version of the popular Gin-based cocktail that I found in my Mixology App. It tasted alright, but I’m still not a huge fan of Champagne in general.