Reggae music was born in Jamaica in the 1960’s and has since traversed the globe thanks to acts like Bob Marley and The Wailers. Let’s take a look at some of Jamaica’s greatest musicians from the genre:

Marley’s influence spread well beyond his music, as he became a figure of the Rastafarian movement and even helped warring political parties come to agreements. “I Shot the Sheriff,” “No Woman, No Cry,” “Could You Be Loved,” and “Buffalo Soldier,” highlight the long list of hits Marley is credited with. Prior to the 1976 Smile Jamaica concert, an attempt on Marley’s life was made, but he only suffered minor injuries. Marley died of cancer on May 11, 1981, He was only 36 years old. There is a statue of Marley in Kingston, Jamaica and many of Marley’s children have entered the entertainment business, carrying on dear ol’ dad’s legacy.

Born James Chambers, Jimmy Cliff acquired his recording name from the cliffs that surrounded his childhood village of Adelphi Land in St. James, Jamaica. Cliff’s first hit, “Hurricane Hattie” came at the age of only 14. Working with producer Leslie Kong, Cliff released one successful track after another until Kong passed away. Cliff also appeared in the movie The Harder They Come, which brought reggae to new audiences. He was the face of the genre until usurped by Bob Marley. Cliff was enshrined into the Rock & Roll Hall of Fame in 2010.

Dubbed ‘The Skafather,’ Hibbert is the leader of the band Toots & The Maytals and he might as well be, given he can play every instrument that makes up the ensemble. In 1966, Hibbert found himself in prison thanks to a possession of marijuana conviction, but his experience inspired one of his best known songs “54-46 That’s My Number.” With The Maytals, Hibbert wrote the first song to actually use the word reggae with 1968’s “Do the Reggay.” Hibbert received the Order of Jamaica in 2012 and still performs to this day, at the age of 71.

Amazingly, Tosh was self-taught on the guitar and he even helped Bob Marley learn to play the instrument. Joined by Bunny Wailer, the three formed the Wailing Wailers. After Tosh split from The Wailers and began a solo career, he released “Legalize It,” his pro-marijuana anthem. This, and Tosh’s defiant personality, led to beatings from Jamaican police. Tosh was even signed to the Rolling Stones record label before returning to his own. On September 11, 1987, Tosh was shot and killed by a man who he had given money to, when that man and three accomplices went back to try and get more cash from the artist.

The Wailer in The Wailers, Bunny Wailer has been described as the best singer among the band and equally talented with writing songs, yet failed to achieve the same level of international fame as his bandmates. This could be the result of Wailer disappearing from the world’s eye for approximately three years after the Wailers disbanded. When he reemerged, Wailer didn’t miss a beat, going on to win the Grammy for Best Reggae Album in 1991, 1995, and 1997. Newsweek named Wailer one of the three most important figures in world music, along with King Sunny Ade of Nigeria and Brazil’s Milton Nascimento.

Known as ‘The Cool Ruler’ (which the Sip Advisor has to admit is a pretty wicked nickname), Isaacs is credited with over 500 albums, including many compilation releases. In the 80’s, Isaacs fell into drug troubles (who didn’t during that decade!) and served a six-month sentence for possession of unlicensed firearms. The drugs took a toll on his smooth voice, but Isaacs kicked the habit and worked in the industry up to his death in 2010, at the age of 59, following a lengthy battle with lung cancer. Today, the Gregory Isaacs Foundation carries on the artist’s charitable work and legacy. 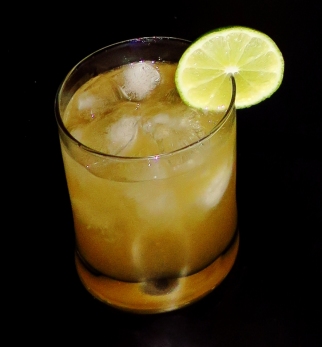 Reggae music has shared a long association with marijuana, so if drinking isn’t your cup of tea, you can celebrate the songs in your own way!

Sip Advisor Bar Notes (5 Sips out of 5):
This cocktail was a knockout spectacular. The Appleton Rum is so nice, as you get a hint of it at the end of each sip. Despite more than two ounces of booze, you can barely taste any liquor, thus making for the perfect recipe. This was my first opportunity to use the Orgeat Syrup Mrs. Sip and I picked up recently and it was a very welcome touch to the drink. I can’t advocate for this cocktail enough!