Well, we’ve reached the end of our Mountain Dew experience. I think I’ve drank enough of the pop in the last few days that I should be signed to an endorsement deal. Seriously, Mountain Dew… come search me out and sign me up! You’ll learn quickly that I’ll do anything for some cash! Here are some more alcohols I’d love to spend that sweet money on:

Like I wrote yesterday about Absolut Exposure (found in the Copenhagen Duty Free), Absolut Grapevine is another “Traveler’s Exclusive”, forcing alcoholics like myself to constantly leave the country in search of booze. This liquor combines white grapes with sweet papaya and dragon fruit. Colour me interested! 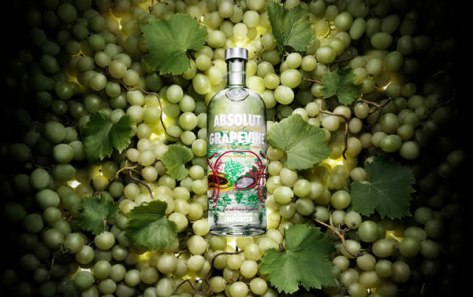 This spirit, found in United States (although its name and ingredients make you think of the Caribbean), combines coconut milk with rum. I’m assuming it would be very similar in taste to Malibu Rum, but with the coconut milk, it might be thicker and, of course, the colour would be white instead of clear.

What do you get when you combine Russian vodka practices with Nordic berries? Well, Smirnoff North for one and probably some other crazy KGB type stuff. I definitely want to give this vodka a run for its money before going on a rampage destroying Fabergé eggs and Matryoshka dolls.

Everyone wants to taste the forbidden fruit, which in this case, is made from a particular type of grapefruit called shaddock and mixed with honey and brandy. Apparently, the alcohol hasn’t been made for some time, so this one may be harder to track down than originally thought. *sad face*

This apple-flavoured gin comes highly recommend from a friend living in the U.K. Gin hasn’t seen the explosion of flavour options that other liquors like rum and vodka have and perhaps that’s because the juniper taste of gin is hard to alter or overcome. When a flavoured gin product does come out, like Hendricks cucumber-flavoured gin, it should be tried just for the sake of experimentation.

Well, that wraps up our four-day tour of liquors I want to taste. How desperate am I to have these substances meet my taste buds? Let’s just say that I’m working on plans of world dominance and ransom, in exchange for booze. It can’t fail!

Sip Advisor Bar Notes (3.5 Sips out of 5):
With every sip of this cocktail, I felt like I was drinking an energy drink. And that’s not necessarily a good thing. I don’t know if that was because I was using the Cherry Noir Vodka or if the Mountain Dew itself was to blame. A large portion of this drink’s points come from the wonderful job I feel I did with presentation. From the goblet glassware choice to garnishing the drink with Red and Green Grapes and Fun Dip, I feel it’s one of the most comprehensive cocktails I’ve put together! The Supernova flavour on its own isn’t that bad, with notes of berries and I really like the colour of the pop, a violet hue you don’t often see, which inspires me to experiment.