Recently, your faithful Sip Advisor contracted a flu which knocked me for a loop and caused me to miss my very first days of work due to illness. During my three-day sabbatical, I worked diligently to document my ordeal and I hope to share those notes with you, my little sippers, today. Don’t worry, all the gross stuff has been removed unless you find under-garnished hamburgers as disgusting as I do!

The first day I wasn’t feeling well I still dragged my butt to work and even played soccer, part of a rotating sports league I’m a member of. For some reason, I’ve always played well when ill. While this wasn’t the seven goals I sniped a few weeks back in ice hockey while playing with a cold, it was a half decent performance. Afterwards is when I really started feeling grungy, though. 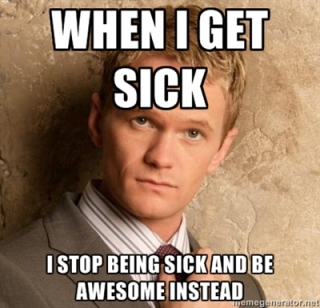 The next morning I woke up and decided to pull the plug on my iron-man streak. I grabbed a spot in front of the TV and searched for some suitable entertainment… quickly learning that there’s not much out there.

When I myself was just a little sipper and was home from school sick, The Price is Right was a favourite viewing pleasure of mine. Bob Barker and his crusade to get your pets spayed and neutered was something all viewers could get behind… plus Plinko was pretty awesome!

The first thing I noticed when watching the show last week is that it now employs a male prize model. The strapping young man is hard not to notice among the horde of attractive women. I wonder if Bob Barker’s sexual harassment allegations would have been any different with less of Barker’s Beauties around. Rod Roddy, on the other hand, would have certainly found himself in hot water with all the males running about.

The funniest thing is seeing male contestants win a prize and go to hug all the ladies, only to double clutch when approaching the guy and go for the ol’ handshake-hug-reacharound.

My TV viewing pleasures didn’t stop there as I tuned into the Maury Show for some paternity results. Not the best idea to try and catch a nap while moms are screaming about babies having the same eyebrows as prospective daddies and these fine gents are denying they’re fathers with more passion than they’ve ever put into, well… anything!

One case in particular caught my attention as a guy, who was denying his daughter, kept bringing up that he had bought his girlfriend a $900 engagement ring. It was mentioned like 10 times, no exaggeration. Did he follow up the proposal by treating her a two-can-dine for $9.99 meal at Mickie D’s!?

Later on during my sickness, I had a massive craving for salt and grease. In my mind, I knew that a quick jaunt to McDonalds was the only way to appease these desires. Without Mrs. Sip around to take care of me and explain to me that McDonalds is not recovery food – she was off gallivanting around town, selling my secret recipes to unscrupulous barkeeps… or so my delirious mind told me – I had to venture out into the rain, umbrella-less and forage for food. While at the restaurant, and figuring I didn’t want to make the brief trip again, should the urge arise a second time, I ordered four hamburgers.

Sadly, I was only able to stomach one (and that was a challenge… damn, I hate it when Mrs. Sip is right!) before throwing the other three in the fridge for a later date with destiny. Those other meals were massive disappointments, with two of the three sandwiches only containing one pickle… and tiny slices at that. This has been a longstanding issue between myself and Ronald McDonalds’ peeps. I’ve complained before, something I’m rarely charged enough to do, but the results of my pleas have not been satisfactory.

Lastly, I largely stayed away from alcoholic bevvies during my recovery, save for my work on this site. However, I felt best – and this could be a disturbing sign – after I had a couple of drinks nearly a week after I was first sick. Alcohol: it cures what ails you! 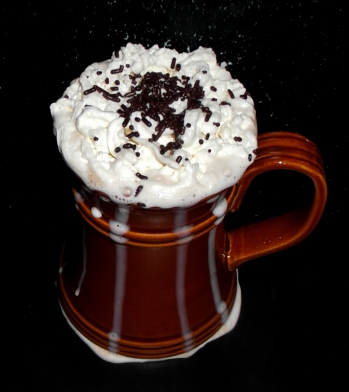 My final observation of the week is that being sick absolutely sucks. You think it won’t be so bad being away from work and lazing around, but it’s horribly lonely, boring and tedious. At least I had sweet lady liquor and this little gem to keep me company!

Sip Advisor Bar Notes (4 Sips out of 5):
An impromptu drink to “celebrate” my recent illness, this was quite tasty, although totally messy… not that there’s anything wrong with that! The whip cream runneth over the glass, but it is forgiven because of how well it mixed with the hot chocolate based concoction on the inside of the glass. I never mind getting a little sticky for the sake of discovery!